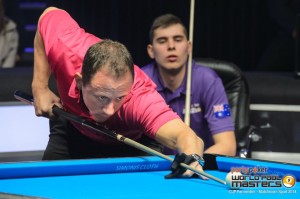 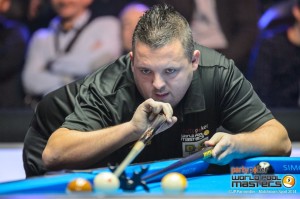 Shane survives a scare to progress

US NO.1 SHANE VAN BOENING survived a nerve-jangling half an hour at the hands of young Aussie James Georgiadis as he edged his way through to the last eight of the 2014 PartyPoker World Pool Masters at the Portland Centre, Nottingham, England.

Van Boening, who returns to the UK in two weeks for his eighth Mosconi Cup appearance, looked to be in the driving seat as he free-wheeled through the racks in the winner breaks format to reach the hill at 7-1.
However, facing a seemingly impossible situation, Georgiadis loosened up and began to claw the racks back with some excellent shot-making and tight safety play. Van Boening, by contrast, looked uncomfortable as he started to miss balls. In the end though, Georgiadis was up against it in the 14th game and a speculative bank on the 3ball left the table open for Van Boening to clinch the victory.

Van Boening said, “I got the momentum going at the beginning but he came back to 7-6 and at that point I had to think about when I have been playing well, like when I won the US Open. I tried to envision that place, because you want to think about something positive and not anything else. You have to try not to worry about your opponent.

“The first match is always tough but you cannot worry who you play. I have a feel of the conditions now and I am feeling good, so I can take confidence to the next round.”
eorgiadis added, “It was a crazy match, up and down. I found it hard early, especially when he was getting the rolls and breaking well. The start is the key and he got to 7-1 up, which makes it difficult to come back from.

“I was waiting for my chance and wanted to make sure I took it. I can take a lot from the match. It shows that anything can happen.”

In the opening match, 2012 Masters champion Karol Skowerski played well in defeating Chinese youngster Wang Can by an 8-5 score line. He now faces Daniele Corrieri in the first of the quarter-finals.

“I am very happy to get through; I was concentrated and focused from the start because I knew it was a dangerous match,” said the Polish star.

“Wang Can didn’t have the break; in six breaks he only got one break and run. I played well and enjoyed the game.”

Classy cueist Chris Melling took a break from the World Snooker Tour and looked as good as ever in defeating No.3 seed Dennis Orcollo by 8-6.

Commented Melling, “The only time I have played pool in the last six months was the World Cup, because I am concentrating on snooker now. Any win against somebody as good as Orcollo, whether it is 8-0 or 8-7 and I know I have played well.

The Masters will once again sport a $20,000 top prize, and the event will be produced by Matchroom Sport Television who will be making 15 x 1 hour programmes of the tournament for international syndication.