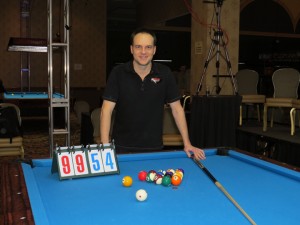 Day 9, the final day, of the Derby City Classic saw Max Eberle crowned the 2013 Straight Pool Champion. Max defeated Niels Feijen in the Semi-Final and Dennis Orcollo in the final. 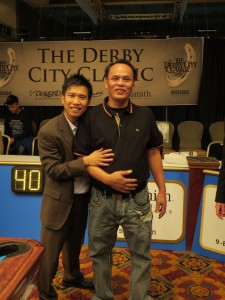 The 9 Ball even would come down to three players, Mike Dechaine, Alex Pagulayan and Shawn Putnam. Shawn got the bye and pass to the finals. The Semi-Final match came down to the final double hill game. When the smoke cleared Alex Pagulayan was moving on to the final. The up and down final at 5 to 5 saw Alex take the lead and with a 9 to 6 win becoming the 2013 9 Ball Champion.  Francisco Bustamante, the 2013 Banks Champion would also take home the $20,000 Master of the Table. Bustamante’s finished first in the Banks, second in One pocket and 6th in the 9 Ball.