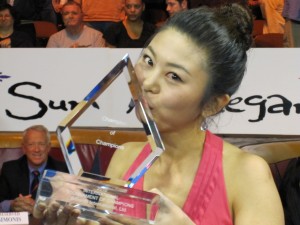 “I feel like I just won an Olympic Gold Medal,” said a thrilled Ga Young Kim moments after capturing the 2010 Mohegan Sun International Tournament of Champions title. The spirited $20,000 winner-take-all event was held at Mohegan Sun in Uncasville, Connecticut, October 6.
Kim, from South Korea and the 2010 U.S. Open Champion, defeated Jasmin Ouschan of Austria, the 2009 WPBA Player of the Year, in a sudden death final match and was crowned the new Women’s “Champion of Champions.” The two semifinals and the Championship match were taped for broadcast by ESPN beginning in December .
“We may look cool out there, but the pressure is overwhelming,” said Kim “You have to play your heart out when every player is a champion. One or two errors and you lose $20,000! Your emotions are just wild during the entire tournament.”
Nonetheless, of the four international champions in the event, Kim fought her way to the title. She defeated Monica Webb of the USA, and 2009 San Diego Classic Tour Champion, in the semifinal round 4-1 and 4-0. The semi and final matches require a player to win two sets, race to four games each set. In the event of a tie, the pressure becomes brutal with a one game sudden death tiebreaker.
The other semifinal also brought cheers from the crowd. Jasmin Ouschan defeated Xiaoting Pan of China, the 2010 WPBA World Ranked number 3. Pan won the first set 4-2 and Ouschan blitzed back to take the second set 4-0. The one game sudden death saw Ouschan perform a crackling break and run out to win the match.
Kim’s final match against Ouschen was neck-and-neck, featuring precise run outs and fierce safety play. Kim narrowly won the first set 4-3 and Ouschan again blitzed back to take the second set 4-0. In the one game sudden death, Ouschan won the lag and the break, but failed to get out. After trading safeties, Kim took control of the table and displayed uncanny shotmaking to close out the Championship match.

The crowd gave Ga Young Kim a standing ovation when she won the final match. She raised his arms in victory and then accepted the highest single winner’s purse in Women’s pool of $20,000. The trophy and the check were presented by Mohegan Sun and Fusion Billiard Tables.
The 2010 event was the 13th Annual International Tournament of Champions. Tom Cantone, Vice President of Sports & Entertainment for Mohegan Sun, was delighted with the brilliant play and the crowd of pool fans. “We will continue to host this event,” he said. “The crowds appreciate watching champions go head-to-head, and the players were a credit to the sport. We are delighted with the world class competition.”
In addition to the fine tournament site at Mohegan Sun, the event was sponsored by Fusion Billiard Tables, Aramith Tournament Billiard Balls, Simonis Cloth, Mueller Recreational Products, Executive Billiards Delta-13 Rack and Silver Cup Chalk. The WPBA sanctioned event was produced by Billiards International, Ltd.