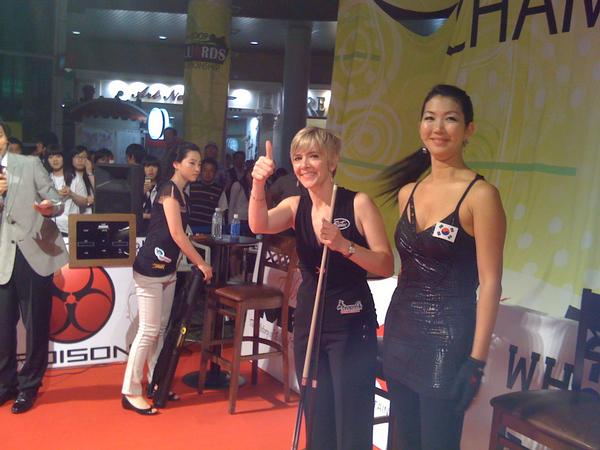 The more experienced Korea Team seemed the likely favorites, and in previous years dominated the event with back to back wins. Players such as Mika Immonen, Thorsten Hohmann, Miyuki Sakai, and Mike Davis played on past teams. The event was the first team to reach 5 matches and the first match was 4-on-4 and the Koreans won easily 3-0. Next was the Mixed Doubles and the Team of Fisher/Breedlove played well to win over Kim/Cha 3-1 to tie the match at 1-1.

Then came the first upset as the dream partner match up of Yu Ram Cha and Jeanette Lee were upset by Fisher/Loraine. Some mistakes by the Koreans gave opportunity to Fisher/Loraine, and some great coaching by Fisher helped them scrape by 3-2 to take the lead over Korea 2-1 in matches. The lead was short lived as Korea bounced back with a quick 3-0 win of Kim over Loraine. Korea then regained the lead 3-2 as they won the next 4-on-4 3-1.

A brief intermission with a special TV show bringing Korea’s famous comedic married couple Junhyeong Park and Jihye Kim. The couple played an 8-Ball challenge game with George Breedlove and Jeanette Lee, pool’s most famous married couple. Breddlove played one handed while Lee played left handed scotch doubles. The Park/Kim team played well to lead needing only 2 balls for a win, but Breedlove made some outstanding one handed shots for the to win. 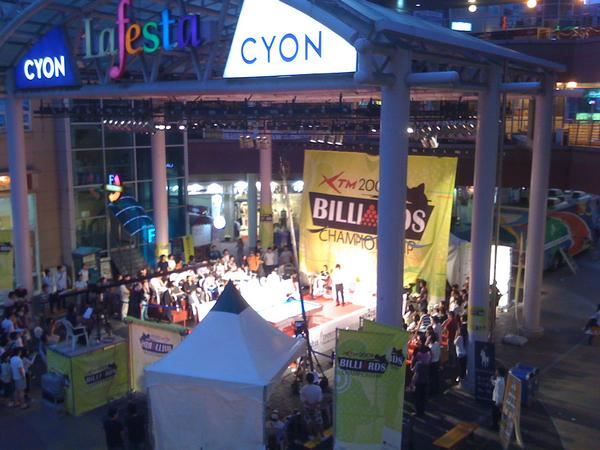 Back to the main event, Korea with a 3-2 lead looked great to get on the hill when underdog Guiyoung took a 2-1 lead over Fisher. G.Lee had an impressive 2nd place finish at 2008 Asia 10-Ball Championships, and had a 2/9 combo looking good. Lee surprisingly rattled the shot and Fisher was able to comeback and win the match 3-2 keeping the team match tied 3-3. Jeanette Lee then easily dispatched Delrosario 3-0 to put Korea on the hill, which left Breedlove/Fisher re-team again to take down Cha/J.Lee. Cha and Lee went up 2-1, but Breedlove and Fisher made great safeties and had good repor and discussions for a fine team effort to win 3-2 and take the match to hill hill .

In the final match of 4-on-4, Team Korea looked nervous as the underdog World Team took the first game. But Korea caught a lucky break when Delrosario missed an easy 8ball and let Korea take the lead 2-1. A missed 9ball by Loraine left Kim a tough cut on the 9ball down the long rail which he barely missed but left an easy game for Team World. It came down to the final game, and almost the final ball as both teams jockeyed and blowing chances to run out. At the end of the game , Delrosario made the 7ball but left Breedlove stuck on the 8ball with no shot. But a great safety by him left G.Lee with a kickshot. A good hit by Lee but left Fisher a missable 8ball. Fisher made the 8ball and luckily clipped the 9ball afterwards leaving Loraine almost dead straight for the win on the 9ball. World Team upsetted the Korean giants 5-4!

“Fisher won all her matches today, aside from the 4-on-4. But the key one was with her and Shanelle defeating Jeanette and Yu Ram. That gave them the real chance to keep it close”, said Kim (Williams).