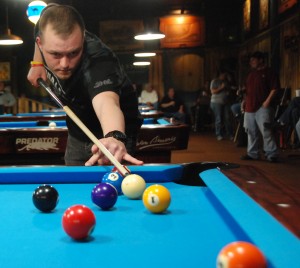 This was the third year for JOB’s new owner, Ricky Gamble, as Jim Blaylock, previous owner, is still enjoying retirement, piloting his yacht around the country.  Ricky still has, former WPBA Touring Pro, Peg Ledman as General Manager of the club and they are keeping the tradition alive for JOB’s.

Two Hall of Famers were present for this event”¦Johnny Archer and Buddy Hall.  Also, legendary player Bill Dunsmore entered this event.  Legends and tradition are commonplace at JOB’s.

Tournament Director Steve McDonald had a busy weekend as 108 open division players and 32 ladies division players showed up for the competition that was held on 7-foot Diamond Smart Tables with Simonis Cloth.  With 28 Diamond Bar Tables, JOB’s provides the perfect venue for the event, as they can handle a large number of players with ease.  And this was one of the strongest fields ever for this event in both the Open Division and the Ladies Division.

This year all the action was covered via live streaming by Ray Hansen of PoolActionTv  Productions.

On Saturday night, JOB’s always has Midnight Madness at this tournament.  This always proves to be a great event, as it drew in a expanded field of 16 players in a single elimination format, race-to-11, paid out first and second place.  It was a $500 entry, so that makes $8,000 to the winners.  This year Johnny Archer and Eric Durbin, won the Midnight Madness.

In the 9-Ball Open Division it went the full two sets in the final with, Danny Smith defeating Larry Nevel.

A raffle cue was given away just before the finals and the lucky winner of Alex Brick Custom Cue was Sam Zuaiter:

The following are tournament results: 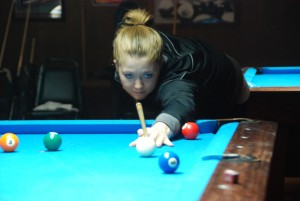 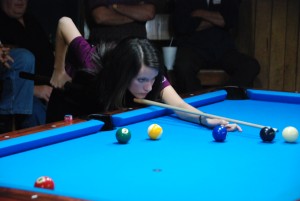 When all said and done over a whopping $42,500 was paid out at this event.