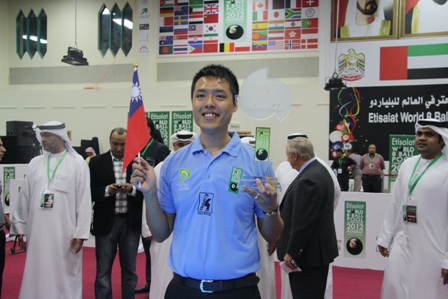 STORY AND PHOTO BY TED LERNER

(Fujairah, UAE)–Call it a case of the student surpassing the master.

Taiwan’s Chang Jun Lin, who for the last ten years has been a pupil of fellow countryman Fu Chei Wei, did his pool teacher proud by winning the 2012 World 8-ball Championship, convincingly beating Fu in an all-Taiwan finals in Fujairah, 11-6.

Chang’s performance today, which started with a gritty 9-7 semi-finals win over England’s Chris Melling, vaulted him atop the pool playing world and deservedly so.  Chang’s ability to read patterns, his even-keel demeanor, and his dead-eye potting skills, were all on display throughout the week in Fujairah and carried him through world class competition all the way to his first world championship.

The fact that Chang has learned much about pool and life at the feet of the 38 year old Fu, added a fascinating twist to what had become an all-Taiwan 8-ball party in Fujairah.  The 26 year old Chang began studying the game from Fu at the age of 16. Despite traveling the world in the last few years, the two had never played each other in an international event.

The fact that these two ended up in the finals of a world championship was amazing result. As is the case in most pro tournaments, the tournament was constantly in a state of flux, with a single small roll of a ball determining outcomes of matches and careers. But by the time the finals rolled around, it was clear that the two hottest players this week had made it.  Like Chang, Fu was playing red hot pool the last few days and had never come close to defeat.  His 9-3 beat down of China’s Liu Haitao in today’s semi-final was just the latest in a string of powerful performances.

Both players were playing at about the same high level so it was difficult to predict who would come out on top in the final.  But one thing was perfectly clear in this tournament; dry breaks and only one missed ball invariably lead to instant punishment from  the other player.  And that’s exactly how this match played out.

Fu won the lag but missed an early ball which Chang pounded on for the clear and a 1-0 lead.  Chang then coolly broke and ran the next rack for a 2-0 lead. Fu broke dry in rack three and when Chang couldn’t convert a long pot, Fu also missed and paid the price for a three rack deficit.

The deliberate Chang doesn’t normally let big leads like this get away, but Fu decided it was time to make a match of it. Fu finally got on track when he broke serve in the next rack after Chang scratched on the break.  He broke and ran rack 5, then broke serve in rack 6, and broke and ran rack seven for a 4-3 lead. That, however, was the last lead Fu would see in the match.

From there Chang stepped on the gas and took the next four frames, which included two break and runs, one clear off a dry break, and a cleared table from a Fu miss, all for a 7-4 lead and a vice grip on the match.

At this point Fu’s energy level seemed to wilt, while the tall and burly Chang just kept motoring along.  Fu got one back, but Chang kept on going, punishing a single mistake by Fu, and breaking and running when he had the break. Chang made Fu pay for a mistake to go up 8-5. Then broke and cleared for a 9-5 lead. Fu got one consolation rack before Chang closed out his first world championship in style; a break and run, and clear off a Fu miss.

Afterward  Chang was understandably highly emotional not just about his amazing accomplishment, but about the man who had helped him get to the top of the mountain, who happened to be the same man he had just beaten to get there.

“It’s like a dream,” Chang said through an interpreter. “To be a world champion. It’s something I dreamed about for a long time. I didn’t feel any pressure playing him.  He taught me more than just how to play pool. He taught me how to be a man in real life, how to carry myself, how to behave and lead your life, don’t criticize and get down on yourself too much. Lead with you actions not your words. He is not just a teacher but a big brother to me, and a good friend.”

For Fu, the result brought on mixed emotions as his long cherished journey to his first world title ended in a losing battle with his very own pupil.

“I played bad in the final,” Fu said, still able to laugh and joke . “I felt like I ran out of energy. I’m very happy for  him. I’m proud. But I think I would have preferred to have played a player from another country.”