Success at Str8-Shots Shoot for a Cure Event!

Success at Str8-Shots Shoot for a Cure Event!

It was a fun weekend with good friends, great pool, amazing stories, as well as true kindness and generosity. The first annual Str8-Shots Shoot for a Cure event was held at Felt Billiards in Englewood, Colorado on September 21-23. It began as a vision between the Colorado Springs couple, Marc and Kimberly Griffiths. They wanted to organize an event to raise money for cancer, a cause they are both very passionate about. They chose LIVESTRONG and National Breast Cancer Foundation (NBCF) as the lucky recipients and began their fundraising campaign. They are also passionate about working with youth so joined with the Billiard Education Foundation (BEF) to raise money and awareness about youth in billiards. The Shoot for a Cure event was launched and raised nearly $9,000 for all three charities.

The Griffiths alone raised $4,000 from their commendable efforts which was used as the total prize fund for the three tournaments: Open, Ladies, and Juniors. Players were asked to sign up online to participate. At the time of registration, they received a link that they could send to their friends and family for either LIVESTRONG or NBCF. Once they raised a minimum of $40 they were all set to play in the tournament. The junior players were asked to raise $25 for the BEF to participate.

Dave Gross, Brian Andrews, and Danny Medina were recognized at the event for the courage and strength they displayed during their battles against cancer. They are truly an inspiration to us all. Junior player, Taren Stewart, was recognized for coming out to support the cause by playing in the tournament after recently having knee surgery. Dave Gross of Fort Collins, a recent cancer survivor, was noticed for his extraordinary efforts in raising over $2,400 in donations for LIVESTRONG.

It was truly a day of selflessness and so many of the grown-ups set some great examples. Carol and Doug James both donated their winnings back, totaling $225. A very generous man, who wishes to remain anonymous, won a raffle drawing for a 5280 pool cue and donated it back to the youth to be raffled. It was won by youth player Aryanna Davis. Tarasa Escoubas passed on her winning raffle ticket to junior player Stephen Griffiths who won a cue.  Marc Vidal gave away the cue he won in the raffle to junior player Cody Escoubas. Several other adults bought tickets for the youth and with those tickets they won some fabulous other prizes. The giving sprit was noticeably felt by all.

LIVESTRONG and NBCF were not the only winners on this weekend. Every junior player that participated received a Str8-Shots goody bag with a t-shirt, stickers, and other great prizes. Players could buy raffle tickets for $1 each for LIVESTRONG and NBCF or $5 each for BEF and every hour a winner was drawn for Str8-Shot grab bags. Both BEF and Str8-Shots also raffled a total of seven pool cues and many other prizes over the weekend.

A message from Str8-Shots: We would like to thank all of the sponsors who donated to this event but can only mention a few here. A big thank you to Cue Times for donating advertising space to the Shoot for a Cure event as it truly helped us get the word out to players. Dave and Sandy Jameson for a very large contribution to the prize fund in memory of their son Greg, a pool player who died in 2009. Finally, Lorraine Kelly for the donation she made in memory of her husband Eric, also a pool player, who died from cancer in 2003. Please visit str8-shots.com for a complete list of those sponsors.

Str8-shots.com is an online retailer for dart and billiard supplies. Visit their store at str8-shots.com/store. The Billiard Education Foundation is a 501(c)3 nonprofit organization aimed to promote higher education for young adults by way of pocket billiards. Felt Billiards is located at 101 W. Floyd Ave. in Englewood, Colorado.

Visit www.str8-shots.com or www.facebook.com/str8shots.whereeveryshotcounts to see all the complete photo gallery from the weekend.

Below are the tournament results. 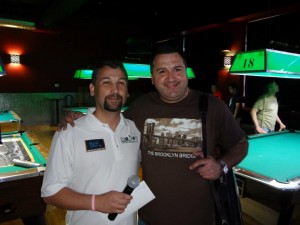 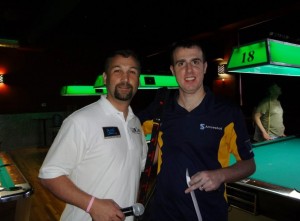 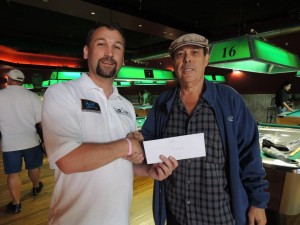 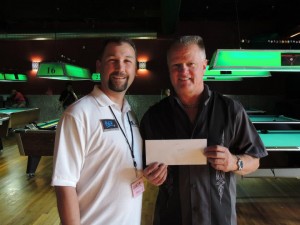 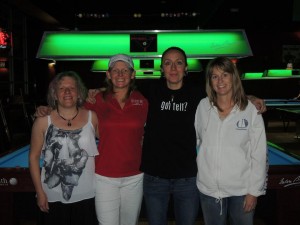 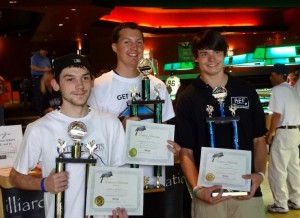 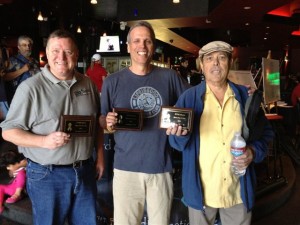 Special Thanks to Crystal & Emily, and the rest of the hardworking Felt staff!