Defending champions China survived a huge scare against Chile in the second round of the BetVictor World Cup of Pool, eventually progressing to the quarter-finals with a 7-6 victory at the Morningside Arena, Leicester, live on Sky Sports, DAZN and networks worldwide.

The Chilean pair of Enrique Rojas and Alejandro Carvajal had taken an early 2-0 lead before being pegged back by China (Wu Jiaqing and Liu Haitao), Wu making a golden break before the defending champions levelled.

Latin American champions Chile, though, we’re unperturbed and worked their way to a 5-3 lead. At that stage they looked set to reach the hill but Carvajal made a mess of the 7 ball, and China were back to within one. It was the turning point China needed. In the next rack it was Chile’s break, one which could have been golden as the 9 sat up in the corner pocket but nothing fell and China had the table.

BetVictor World Cup of Pool – Round One 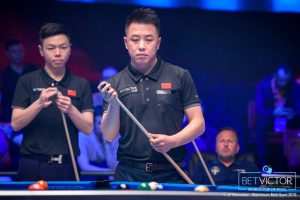 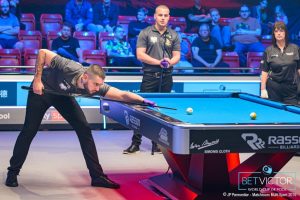 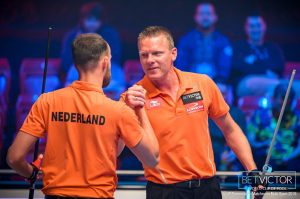 Defending champions China are safely through to the second round of the BetVictor World Cup of Pool after a commanding performance over Sweden, in a session which also saw Albania beat Russia and Netherlands see off South Africa at the Morningside Arena, Leicester, live on Sky Sports, DAZN and networks around the world.

The opening session of the $250,000, 32-team event saw China’s Wu Jaiqing and Liu Haitao fire a warning shot to the rest of the field with a resounding 7-1 win as they look to become the first team to successfully defend a World Cup title.

They were gifted the first rack when Tomas Larsson missed a simple 6 and took the subsequent three racks for a 4-0 lead. Sweden, whose team also included European Mosconi Cup captain Marcus Chamat, got one on the board after Wu failed to cut a 4 up table but lost position on the 7 in the following rack. After a brief safety battle, US Open finalist Wu was left an open shot and China completed the set for a 5-1 advantage.

In winning the World Cup last summer, it was Wu who led the attack for China, with Liu perhaps not at his best. It was noticeable in this match that Liu was already performing better than he had 12 months ago, an ominous sign for the 31 teams hoping to rip the title from China’s grasp.

The final two racks required for victory came without Sweden returning to the table, and the reigning champions progressed through to round two with a 7-1 victory.

The second match saw some of Europe’s best young pool talents take to the table. For Albania Eklent Kaci was joined by Besar Spahiu, while Russia featured the fearsome pairing of Fedor Gorst and Ruslan Chinakhov.

The first six racks were shared but from 3-3 Albania opened up a two-rack advantage. They were then given ball in hand when Chinakhov missed the 5 ball, which was sat invitingly in the jaws of the corner pocket. Kaci was struggling with his cueing and couldn’t take immediate advantage, however on their next visit Albania did clear the table to move to the hill before securing their progression to round two with a 7-3 victory.

“We are very happy to progress to round two,” said Spahiu, who works as a full-time police officer. “We enjoyed the match, but we will hope to play better in the next round. The police force is good to me – if we keep winning they will let me take more time off, so let’s hope we keep winning.”

The session’s final match saw Netherlands up against South African twins Vincent and Richard Halliday. The Dutch pair of Niels Feijen and Marc Bijsterbosch raced to a 3-0 lead but the latter scratched with just three balls remaining, allowing their opponents to clear.

The Dutch moved 6-1 ahead before South Africa got another rack on the board, but it took just one more rack for the Netherlands to complete the victory and join China and Albania in round two. All three will find out their next opponents during this evening’s session, which begins at 7pm local time.

GERMANY AND JAPAN DUMPED OUT OF BETVICTOR WORLD CUP OF POOL 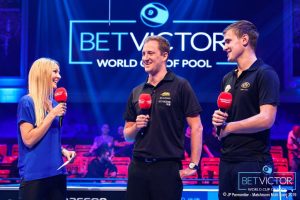 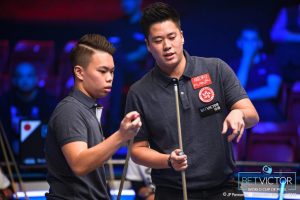 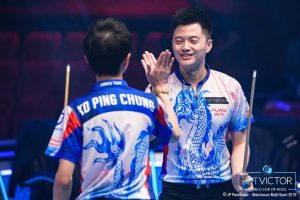 Germany and Japan were dumped out of the BetVictor World Cup of Pool on Wednesday afternoon as Estonia and Hong Kong, China upset the odds at the Morningside Arena, Leicester, live on Sky Sports, DAZN and networks worldwide.

There were no such problems for Chinese Taipei, however, as brothers Ko Pin Yi and Ko Ping Chung defeated Romania 7-2.

The first match of the day saw one of the pre-tournament favourites, Germany, take on Estonia, made up of Denis Grabe and Mark Magi. The German team comprised former World Cup winner Ralf Souquet and reigning World Champion Joshua Filler and were fancied by many to go all the way this year.

The teams exchanged the first eight racks, although at 1-1 Grabe snatched at the 9 to leave Souquet a cut which the former World Cup winner missed, giving Estonia a let off.

At 4-3 down and breaking, Magi made the tournament’s first golden break to bring the match level, and from there Estonia opened up a 4-6 lead. Germany pulled one back on their break, but at 6-5 Estonia looked to have a roadmap to the second round. However, Magi scratched to the middle pocket and the German’s took it to hill-hill.

At that stage Souquet and Filler took a toilet break, keeping Estonia in their chair to dwell on the mistake. When they returned, Souquet was breaking but they lost position on the 5 and it was Estonia who got the better of the safety, and eventually the rack, for a 7-6 win.

“We are delighted with the win,” said Grabe. “We beat one of the top seeds, Germany. We know Joshua Filler is the World Champion so it was a tough match but we played well and we are happy with the win.

“We know we are capable of playing really, really well. Last year we only lost 7-6 to the winners, China, so we know we can play against these guys.”

The second match saw a second unseeded team advance as the young duo of Lo Ho Sum and Yip Kin Ling took Hong Kong, China into the second round. They dumped Japan – Naoyuki Oi and Toru Kuribayashi – out 7-4.

The Japanese favourites stormed to a 3-0 lead but Hong Kong, China fought back to level the all-Asian affair. The 19-year-old Yip then executed a brilliant jump to bank the 3 as his side moved ahead for the first time. Japan hit back but from there it was all Hong Kong and the young pairing saw out the victory to advance to the second round.

Among the pre-tournament favourites were Chinese Taipei, and the Ko brothers Pin Yi and Ping Chung showed none of the issues suffered by some of the seeded teams as they dispatched Romania 7-2.

Having fallen behind in rack one, the Romanian duo Babken Melkonian and Ioan Ladanyi levelled after breaking in the second. Chinese Taipei, though, were on the hill before Romania could get their second rack and the comeback was over before it started, a mistake on the 8 gifting Chinese Taipei the rack, and the match.

The BetVictor World Cup of Pool continues with three more first round matches, including hosts Great Britain A against Tony Drago’s Malta.

The BetVictor World Cup of Pool is sponsored by Rasson Billiards, who supply the Official Table; the cloth is supplied by Iwan Simonis and the Official Balls are Super Aramith by Saluc. Predator are the Official Cue of the event and Kamui the Official Chalk and Tip.