Stuart, FL (Oct. 7, 2012) – Plenty of pool players pretty in pink, 29 to be exact, came to play pool at the Flamingo Billiards Tour 4th Annual “Cues for the Cure!” breast cancer fundraiser at Amy’s Billiards in Stuart, Florida on Saturday.  This event was co-sponsored by the Pure-X ACS All American Tour.  Seven pretty new players got their preliminary taste of competing on the WPBA-recognized Regional Tour at this pretty in pink special pool event.

The day was particularly especially promising for Jennifer Page as she played to win her first event on the FBT, a win that has been long overdue. Page, hot off winning a qualifier spot for the APA US Amateur, played pretty strong throughout the day while taking advantage of her opponents’ mistakes along the way. Jennifer ultimately took the title by winning a payback match against Crystal McCormick, after losing a hill-hill match to McCormick earlier in the day.  The final match was a painful final one for McCormick, as she watched the event slip away scratch after scratch. Coupled with Page’s powerful performance, the momentum was with Page as she prevailed and added her name to the list of “Cues for the Cure” winners.

Our thanks to all the players who came out to support the event and the FBT, many thanks to room owner Amy Poulter, of Amy’s Billiards, Boynton Billiards and to John Lewis and the American CueSports Association for their continued support of the FBT.

The Flamingo Billiards Tour is a WPBA-recognized Regional Tour, and is a stepping stone to the Women’s Professional Billiard Association for women who want to play professionally.

Mary Ellen Clements won the free entry into the ACS National Championship Singles in Las Vegas in May 2013.

The last stop for 2012 is the End of Year event, Nov. 17, 2012, at Ultimate Billiards in Ft. Pierce, Florida. For more information, visit http://www.flamingobilliardstour.com/. 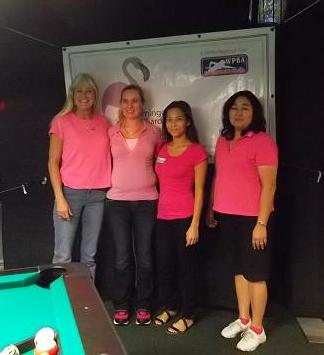