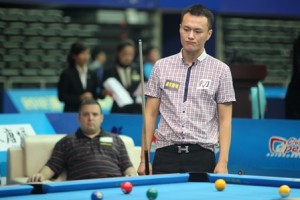 (Shanghai, China)–The 2012 China Open got underway on a rainy Thursday afternoon here in Shanghai, and it didn’t take very long for the fireworks to start going off inside the Shanghai Pundong Yuanshen Stadium.
Defending Champion Chris Melling from England was first up on the TV table and immediately found himself in a dogfight with tough Chinese player Dai Yong. The 33 year old Englishman couldn’t get a shot off the break while Yong had all the rolls and led throughout the race to 9 match. Dang was one away from a monumental upset at 8-6 but couldn’t close the deal on Melling.  Then at 8-8, Dang had to give up the table with only four balls remaining.  Melling pulled a great escape when he nailed a hair raising full table bank on the 7 ball, then a full table pot on the 9 for a 9-8 win at the wire.

“Everything went his way,” Melling said afterwards. “I couldn’t get a shot on the break and I had to play silly shots on every rack. I guess I was lucky to win but I also feel that I deserve it. But you need luck to win in pool.”

The 64 players in the men’s field are divided into eight groups of 8, playing double elimination. Four players from each group will advance to the final 32 single elimination stage.

World number one and current World 9-ball champion Darren Appleton had a walk in the park as he cruised past South Africa’s outclassed David Van Den Berg, 9-0. In another whitewash which will surely raise some eyebrows, Qatar’s Waleed Majeed blanked the USA’s  Corey Duel, 9-0.

Conditions on the Star tables were giving some players fits, as the new cloth and cold air inside the arena made for super slick ball movement and bouncy rails.  The use of the Magic Rack template almost guarantees that at least one ball is made on the break. The result is that getting an open shot off the break is often the decider in a rack, if you can get the speed of the table.

The USA’s Mike Dechaine found himself shaking his head after getting clobbered in the second session. It was the talented American’s first time to play in Asia and he had about as tough opponent as one could ask for in Chinese-Taipei’s Ko Pin Yi. The match wasn’t even close as a jet-lagged Dechaine couldn’t adjust to the tables, and he lost 9-2.

“This is totally different from how we play in America,” Dechaine said afterwards. “I couldn’t get the feel of the table.”  Overall it’s been a miserable opening day so far for the USA, as Hunter Lombardo also lost.

There were several matches on the ladies side but most of the big names had byes in the first round. In a TV table amtch, pool legend Allison Fisher beat veteran Taiwanese Liu Xinmei 7-3. Japan’s Akimi Kajitani won 7-6 over China’s Ren Qiuyue, while Japan’s Chichiro Kawahara beat China’s Zhou Doudou, 7-2.

The tournament continues on day 1 with an evening session preceded by the opening ceremony.

The 2012 China Open runs for four days beginning Thursday, September 13 through Sunday September 16, at the Shanghai Pudong Yuanshen Stadium in Shanghai and is a major ranking event of the WPA.

The men’s event has 64 players playing in eight groups of 8, double elimination, alternate break with four players progressing from each group to the final 32, which is then a straight knockout.  The men’s event offers $176, 600 in prize money with $40,000 going to the winner.

The women start with 48 players divided into eight groups of six players, with the top two progressing to the final 16, which is then single elimination. The total prize fund for the women is $125,600 with $30,000 going to the eventual champion.

The WPA will be providing full coverage of the 2012 China Open, including live scoring on the WPA website, www.wpapool.com, and daily articles.

*The World Pool and Billiard Association(WPA) is the governing body of the sport of pocket billiards.The 2012 China Open is being sponsored by Star Tables, Andy Cloth, Fury, Holiday Inn Shanghai Pudong.