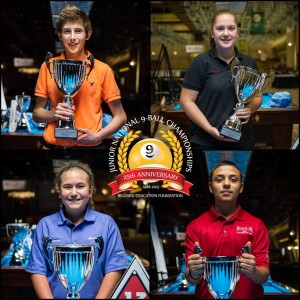 Of the 38 player field, taking top honors in the 18 & Under Boys Division is the reigning 2012 – 14 & Under Boys champion, Zachary Hampton. In his first year competing in the 18 & under division, Hampton lost his second match to last year’s top finisher, Chad Behnke, returning later to eliminate Behnke, along with two other familiar 18-year-olds, Brendan Crockett and Tyler Styer.

In the 18 & Under Girls Division, 17-year-old Briana Miller set BEF history by going undefeated to claim her seventh consecutive win as Junior National Champion of her division. Since she was 11 years old, Miller has been dominating the girls divisions, medaled at the World event, and has won more in academic scholarships than any other participant, totaling over $6,000. Taylor Reynolds put up a strong fight in the finals but would have to wait until next year to claim the thrown. Newcomer Sierra Reams impressed the stands, proving she can have both academic and billiard accomplishments.

This year’s 14 & Under Boys Division saw the largest field of 51 players qualifying from all over the country. 14-year-old Sergio Rivas went undefeated to claim the title proving he’s ready to play against the 18-year-olds next year. Rivas took third last year and defeated Texas State Junior Champion, Joey Bourgeois, in the finals with a convincing score of 9-2. Michael Evans and Nathan Diederich also had impressive finishes.

The first round of the 14 & Under Girls Division saw a rematch from last year’s finals match. Karsyn Terry delivered reigning champion April Larson her first loss but the 4.0 student did not give up. Larson, known to her hometown as “The Shark”, fought her way back, overcoming two hill-hill matches to defend her title and represent her country again at the upcoming Junior World Championships. Larson defeated Terry and Emily Herpel, before facing Alex Booth in the finals; giving up only two games over the three matches.

Online brackets were provided courtesy of Bad Boys Billiard Productions and available at CTSOnDemand.com. HD quality streaming of the finals matches was made possible courtesy of TheActionReport.com.

Great appreciation go to the event staff and volunteers who have made this a first class event for years, and many more to come: tournament director Earl Munson for his 8th year of support, tournament assistants & mini-tournament coordinators Mel & Tammy Jo Leonard, National Head Referee Rick Doner for his 10th year of support.

Special Thanks also go to the amazing staff at Ric & Bonnie Jones, Rich Parkeson and all of the staff at Bad Boys Billiard Productions, TheActionReport.com crew (Justin Collett, Andy Chen, and Tim Wampler), Ken Shuman, David & Linda Vandenberghe, Mark & Sunny Griffin, Mark Estes, Aric Pfeifer, the CSI staff, and Steve Schoenfelder of Pechauer Sales & Repair. We cannot thank you enough for all your support and many of your generous donations.

We’d also like to thank our guest speakers Jennifer Barretta and “The Dragon” Tim Chin for their inspirational presentations during the annual event banquet which hosted over 300 attendees (including players, family members, sponsors and supporters). Both players also participated in the popular annual adult-youth scotch doubles tournament. Barretta relentlessly helped to raise funds throughout the week through her movie sales, challenge matches, and exhibitions.

Thanks also to the Mark Wilson, Lauren Nystrom, and the Lindenwood University staff who were present, actively recruiting budding young student-athletes for a chance to further their education while pursuing their billiard dreams. As always, we recognize our loyal media sponsors: AzBilliards.com, Billiards Digest, InsidePool, Pool&Billiard, Cue Times Billiard News, and On The Break News.

Any young players interested in participating in next year’s BEF Junior National 9-Ball Championship or State Championships should visit the BEF website at BilliardEducation.org or call the office at (303) 926-1039.

Two more boys will be joining the top finishers at the upcoming junior world event. To be announced at a later date.