No stranger to 14.1, Archer looked incredible on day 2 at the 72nd Predator World Tournament of 14.1.

No stranger to 14.1, Archer looked incredible on day 2 at the 72nd Predator World Tournament of 14.1.
photo by  charleseamesphotography.com 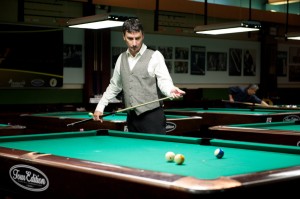 Queens, New York-  Excitement is building on Day 2 of the preliminary races to 100 rounds of the Predator World 14.1 as the day culminated into two big highlights for the USA. While Europe still looks strong, and Efren Reyes still goes undefeated, it was the Americans that came with the tournament’s first perfect scores.

John Schmidt lived up to his moniker of Mr.400 tonight. He had his hands seemingly full against former World 14.1 Champion Stephan Cohen of France. Under the live stream and in front of a packed audience, Schmidt delivered a flawless performance. After winning the lag, John opted for Cohen to break. Schmidt took his first offensive shot and never looked back. A perfect 100 ball run.

Minutes after the ovation from the highly appreciative audience, Johnny Archer finished off his 100 ball run over NYC qualifier Bob Madenjian. Needless to say, USA is making their mark.

“Hey, I know most people are counting us out with the Europeans being so dominant in 14.1. But believe me, the Americans can play some good straight pool and I feel we can hang right there with anyone in the world”, said Schmidt after the match.

The 2nd Annual Straight Pool Hall of Fame Dinner will be inducting Danny Diliberto and Jack Colavita. Fans can buy tickets in advance by going to http://worldstraightpool.com/tickets.html

Get the latest news by following http://www.facebook.com/Worldstraightpool and www.twitter.com/Dragonpromoter
Reserve your tickets for the main events and the exhibitions at: caromcafe.qrickets.com
Pay per view streaming available (14.1 and 3c):  www.worldstraightpool.com 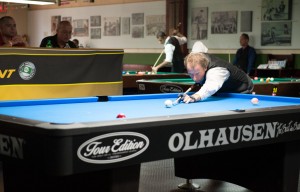 Strickland is lovin his first World Tournament of 14.1 experience!

Queens, New York-  The first timers in the Predator World Tournament of 14.1 are making the most of their initiation. Efren Reyes, Earl Strickland, and Darren Appleton have yet to taste defeat in the round robin stage of the event. All three players have won their matches soundly and look like the favorites to win their respective groups.

Earl Strickland won his first three matches with landslide victories. He finished each match in an impressive 2 innings, taking down Danny Barouty 100 to 18, Jeff Molh 100 to 11, and last year World 14.1 Bronze Medalist Charlie Williams 100 to 38 in a 3 inning match.

“This is a great game. This is how all tournaments should be played. I love the equipment and just like to see longer races. Straight pool is the way to go and I’d love to see more events like this”, said Strickland. “Honestly, even if I lose, I won’t take back what I said. We need to play more straight pool.”

On the TV stream table, Reyes and Deuel played a see saw match which saw Reyes lead, Deuel lead, and Reyes lead and with a final comeback charge from Deuel. Deuel put together a 50 ball run but gave the table upto Efren, who in turn came back and took the lead needing only 11 balls, but came on a tough breakout shot and played safe. Corey gave a safety back and a defensive battle ensured. Corey would win the defensive battle against Reyes when he opted for a 4 ball combination in the stack. Deuel judged it right and went onto catch up to Reyes 89-79 before missing and giving Efren the win.

Defending champion Thorsten Hohmann looks smooth sailing with 3 wins so far. Huidji See of NED also is coasting undefeated.
But notable names that are in danger of not qualifying include last year’s finalist Mike Davis who is now winless in three matches. Bronze medalist and host Charlie Williams is 1 win and 2 losses and is facing do or die matches tomorrow.