Pool’s Best Push Through To The Final 64

(Doha, Qatar)–A veritable armada of pool’s biggest stars pushed their way through to the Final 64 knockout stage at the Al Arabi Sports Club in Doha today, as the business end of proceedings quickly started to take shape at the 2018 World 9-ball Championship.

It was a very busy day which saw 32 players qualify for the money rounds, and another 32 players see their dreams of glory come to a screeching halt.

Of course it was quite expected when the tournament began on Friday that over half the original field of 128 players from over 40 countries had no chance at actually winning the event. But the outcomes today were somewhat surprising in that we saw few of the upsets fans have come to expect in the group stages over the years. The only big name to fall by the wayside and get a pink slip was 2001 World 9-ball Champion and Hall of Famer Mika Immonen, who lost his second straight match in as many days.

Otherwise the day’s action saw one superstar and rising star after the next take their place in the final 64. When the field is filled at the end of the day’s play on Sunday, fans around the world can expect one of the finest runs to the gold in many years.

World number one Klenti Kaci hasn’t looked his sharpest so far. But the 19 year old Albanian did what he had to do in a steady 9-6 win over Kuwaiti Meshaal Al Murdhi.

Defending champion Carlo Biado of the Philippines seemed to be on cruise control in his 9-5 win over Russia’s Sergey Lutsker. Despite being the reigning 9-ball king, the Filipino great benefits from being so humble and so low key that he plays almost unnoticed.

Taiwan’s biggest monster right now-and that is saying something– is surely Chang Jung Lin who is currently ranked number 2 in the world. Chang did win his second straight match to qualify today, but he once again had to go to the limit to get there. Chang blew an 8-5 lead to Greece’s Damianos Giallourakis and had to eke out victory with a nervy clear in the very last rack for a second straight 9-8 win.

The USA’s Shane Van Boening, who is one of the heavy favorites this week in Doha, didn’t have as easy a time today as he did on day one. But he was never in real trouble against Venezuelan veteran Jalal Al Sarisi, winning 9-7. SVB’s Mosconi Cup teammate Corey Duel played steady 9-ball and easily defeated Finland’s Petri Makkonen 9-4 to make the knockout stage.

World number six and 2014 champion Niels Feijen had another solid day, defeating Spain’s Francisco Diaz-Pizarro, 9-7. The Dutchman’s Mosconi teammate Albin Ouschan didn’t fare as well as he took a thumping from Poland’s Konrad Juszczyszyn, 9-4.  Juszczyszyn may not be a household name to pool fans but it should be noted that he is the current European 9-ball champion. Another Pole who scored a very big victory was Mateusz Sniegocki who took down a very tough Filipino, Jeffrey Ignacio, 9-5. Tomasz Kaplan made it three for Poland today with a win over South Africa’s Jason Theron.

It was good day for the Germans as both Ralf Souquet and Joshua Filler won their second straight matches to qualify for the final 64.  18 year old Russian Fedor Gorst continued to impress as he qualified with a handy 9-1 win over Jeong Young Hwa of Korea. 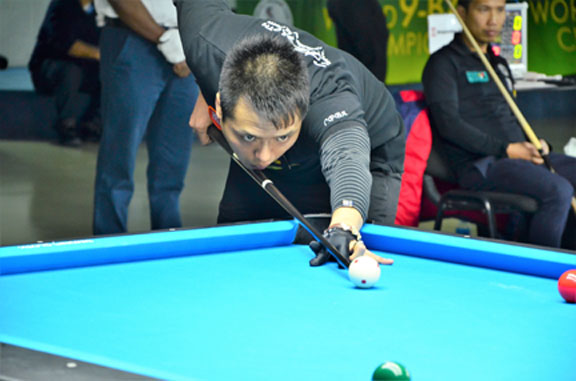 It was a very big day for the Japanese side as three players made it through with impressive wins. Takano Tomoo took down former world champion Wu Jiaqing 9-8. Naoyuki Oi was a 9 – 4 winner over Finland’s Casper Matikainen. And Tomoya Iima took a 9 – 7 win over Hoang Guong Quoc of Vietnam. 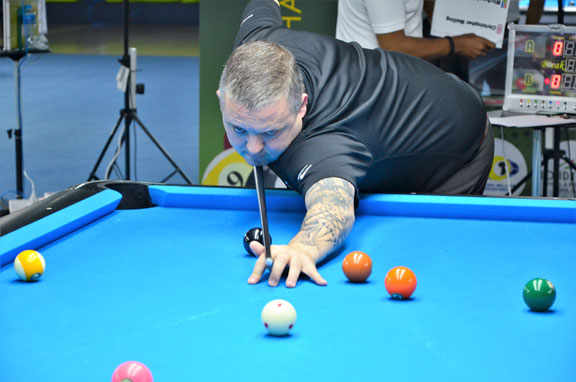 Play continues on Sunday in Doha at the Al Arabi with the action beginning at 12pm local time(GMT +3.) All matches on Sunday will be do or die, losers side matches with the winners advancing to the knockout round and the losers going out of the event.

Results of Day 1 Van Boening, Other Top Stars Cruise On Day One In Doha

(Doha, Qatar)–Shane Van Boening has never won a World 9-ball Championship. He did, of course, come ever so close, finishing runner up in 2015, and 2016. After skipping last year’s championship, however, there is a palpable sense in Doha that the American star is absolutely destined to finally grab the world crown in 2018.

Interestingly there are eight former World 9-ball Champions in this year’s field, all of them still highly capable of pulling off the impossible feat yet again. But nobody is yet talking about them. It’s the moniker ‘SVB’ who is on everyone’s lips. 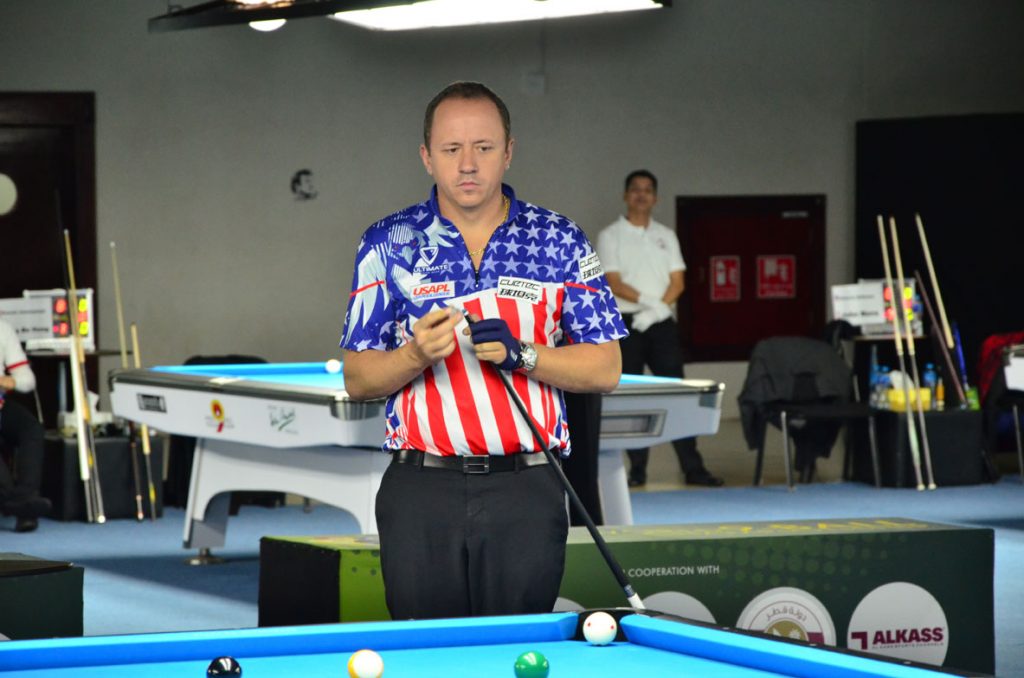 Van Boening has admitted that he is playing his best pool perhaps ever. After a grueling six month training regime, he led Team USA to a thrilling victory in the Mosconi Cup last week. He showed up in Doha saying he intends to win, and that he is playing with zero pressure on his shoulders.

Fans in Doha, and the pro pool community itself seem to agree something is afoot. While most players played in the relative obscure quiet of the cavernous Al Arabi Sports Club on day 1 of this year’s championship, Van Boening’s time in the arena today actually drew a fair amount of watchers. Everyone and anyone who likes pro pool around here seems to feel something special is afoot.

The American didn’t disappoint in his first outing, as he crushed Poland’s Marek Kudlik 9-1. Good breaking, solid potting, deft safeties all showed up in Van Boening’s arsenal today. Combined with his quiet confidence, SVB laid down an early marker stating that nothing short of victory in Doha will suffice.

As all 128 players saw action on the first day of the 2018 World 9-ball Championship, it’s clear, though, that Van Boening will have plenty of serious contenders just as eager and capable of taking the crown on December 20. This year’s field is positively stacked with ferocious talent, both young and not so young. With the Wiraka tables breaking fairly easily-wing ball down, 1 in or near the side pocket-it’s all going to come down to who can handle the almost impossible pressure. Pool fans are in for a real treat over the next six days.

In the group stages it’s all about just winning two matches, to make it through to the final 64, where the tournament becomes single knockout all the way to the final. Defending champion Carlo Biado of the Philippines had an easy time of it today, easily taking down Argentina’s Llanos Jorge, 9-3. The man who lost in last year’s final to Biado, fellow Filipino Roland Garcia, came into Doha one of the hottest players in Asia and with high expectations. Garcia, though, stumbled out of the blocks to Taiwan’s Hsu Jui An, 9-8. Garcia will move over to the one loss side of his group where he needs two wins to advance.

World number one Klenti Kaci came out looking tired against the always tough Chilean Alejandro Carvajal. The Albanian teen was down four racks early but battled back to clip Carvajal at the wire, 9-7.

It was a good day for the USA Mosconi Cup team as both Billy Thorpe and Corey Duel notched victories, and moved with one win of making the final 64. Canada’s Alex Pagulayan, a winner in 2004, barely scraped by Lebanon’s Mohammad Berjaoui, 9 – 8.  Fellow Canadian John Morra has an easier time of it today, blanking the Philippines Roberto Brillantes, 9-0.

Taiwan’s Chang Jung Lin is considered one of the tournament favorites but he struggled mightily against Korea’s Kwon Hojun. Chang was actually down 6-2 at one point but stormed back and won at the wire, 9-8.

England’s Chris Melling is someone people seem to be talking about as a possible champion, and the lone British representative on hand didn’t disappoint, winning easily over the Netherlands Marc Bijsterboch, 9-2.

Former world champion Wu Jiaqing of China cruised with a 9-1 win over the Netherlands’ Jimmy Worung. China went 5 out of six today with wins also by Dang Jinhu, Liu Haitao, Wan Can and Xu Xiacong.

Qatar’s favorite player made a splash today. Waleed Majid, who made it to the quarterfinals here in 2014, showed that he has clawed his way back into championship form with a 9-5 win over former US Open champion, Yu Hsuan “Kevin” Cheng. 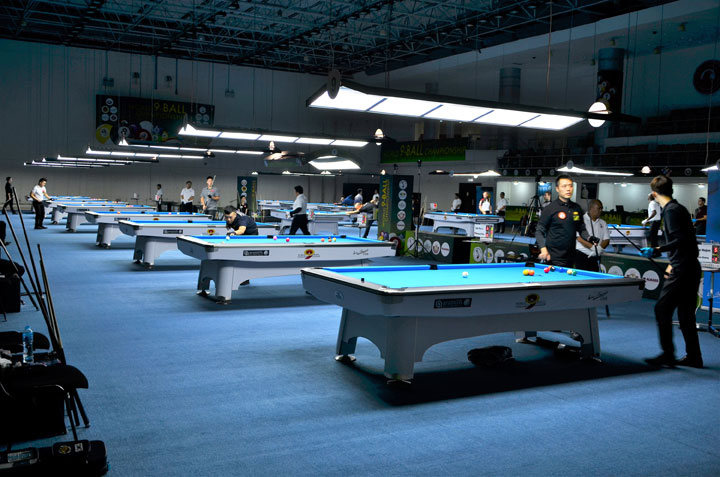 Fans around the world will be able to view many of the matches via the QBSF’s free live streaming platform. Multiple tables will be available to view online at no charge to the public. Please visit the WPA Facebook Page for more information.