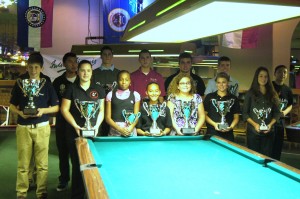 The top finishers in the 18-and-under boys’ division were native to junior billiard competition. Landon Shuffett, winner of four (4) consecutive Junior National titles from 2007 – 2010, proved that he didn’t forget how to win after taking a year off from competition in 2011. Shuffett steadily proceeded through the winner’s bracket with wins over Kevin Sun 9-5, Ryan Ponton 9-1, Zachary Leonard 9-2, and William Chappell 9-1 before losing to Brendan Crockett 5-9. Crockett, runner-up in the 2011 Junior Nationals and 2009 champion of the 14-and-under boys’ division, effortlessly cruised through the winner’s bracket without a loss. Crockett defeated Tyler Howell 9-0, Daniel McComas 9-3, Joey Torres 9-5, Tyler Styer 9-5 and Landon Shuffett 9-5 to claim the seat as the only undefeated contestant in the 43 player division. On the one-loss side, Chad Behnke diligently proceeded to win an impressive 8 matches after losing his first match to Brady Behrman 6-9. Behnke shot his way through Austen Warner 9-2, JC Torres 9-7, Logan Zuponcic 9-0, Jonathan Ailstock 9-5, Zachary Leonard 9-2, Kevin Sun 9-8 and Tyler Styer 9-4 before a rematch with Brady Behrman, winning 9-3. With only one more match to win for a chance to rumble with the undefeated Crockett, Behnke fell short by only 3 games, losing to Shuffett 6-9 in the semi-finals. Shuffett gladly embraced a rematch with Crockett and an opportunity for another title. In the race to 11 finals, an unforeseen scratch by Crockett when the score was 7-4 caused a shift in the ebb and flow of the match. Shuffett seized the opportunity to tighten the gap and then followed with a break-and-run, narrowing the score 6-7. The alternate break format allowed Crockett to get back to the table. He gracefully took charge, pocketing eight balls, but scratched while getting position for the 9-ball. Staying focused and determined to win, both players edged their way to a 10-10 match, each needing only one more game to win the championship. Shuffett won the final game and his fifth title as Junior National Champion. 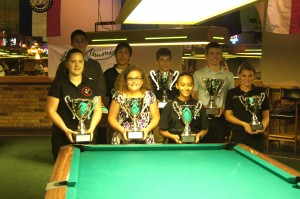 The showdown in the 18-and-under girls’ division featured Briana Miller and Taylor Reynolds. Advancing to the 15-18 year old bracket this year, 15 year old Reynolds was determined to prove that age is not a factor in winning. Reynolds steam-rolled her first 3 opponents, Tessa Brown 7-0, Carly Fristoe 7-0 and Cristina Watson 7-0, before being slowed down by Briana Miller. Miller needed only one game to take charge of the winner’s bracket, but the trailing Reynolds confidently won the next 5 games to win the match 7-6 and took reign of the winner’s bracket. Miller made her way by defeating Sarah Bridgman 7-0, Ashley Fisher 7-2 and Juli Poutry 7-2, before losing to Taylor Reynolds 6-7. Miller collected her composure and ambushed her next opponent Ashley Fisher 7-1 and earned an opportunity to defend her title. Miller tamed the fierce Reynolds in the finals, winning the match 9-7 and claiming her sixth title as Junior National Champion in the girls’ division.

In the 14-and-under boys’ division, Zachary Hampton, first time attendee at Junior Nationals, received an initiation by losing his first match to hometown favorite Sergio Rivas 6-7. Hampton’s light-hearted demeanor and determination carried him through the one-loss bracket defeating Joshua Goodknight 7-0, Michael Darling 7-0, Mahkeal Parris 7-6, Cody Carter 7-2, Seth Chilcutt 7-0, Ricky Evans 7-3, Mason Koch 7-5 and Shawn Begay 7-3, before a rematch in the semi-finals with Sergio Rivas. Rivas made his way through the winner’s bracket defeating Brandon Descamps 7-0, Zachary Hampton 7-6, Shane Wolford 7-5, Kaiden Hunkins 7-0 and Shawn Begay 7-1, before being defeated by Manny Perez 5-7. Perez advanced through the winner’s bracket with victories over Peter Steele 7-5, Ricky Evans 7-3, Mikey Evans 7-1, Mason Koch 7-2 and Sergio Rivas 7-5 to guarantee himself a seat into the finals. In the semi-finals, Rivas and Hampton eagerly battled for a chance to play in the finals. This time, Hampton prevailed 7-5. Hampton’s momentum continued in the finals as he persevered in the 54 player field, ousting Perez 9-6 and winning the championship title in the 14-and-under boys’ division. 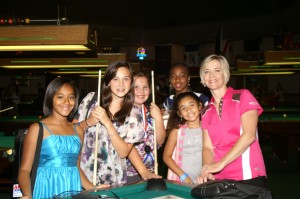 In the 14-and-under girls’ division, it was former runner-up April Larson who gleamed as she breezed through the winner’s bracket defeating Morgan Chesla 7-2, Tori Kover 7-1, Katelin Ballou 7-1, Isabelle Plumb 7-2 and Kyra Avalos 7-4 to secure her seat in the finals. Avalos trekked through the event with wins over Jessica Pitsinger 7-0, Katilyn Hall 7-0, Alex Booth 7-4, and Karsyn Terry 7-4 before losing to April Larson 4-7. In the semi-final match, Terry dashed to the finals with a 7-1 win over Avalos. The confident and poised Larson kept Terry at bay, winning the match 9-2 and earning her first Junior National title.

The champions of the four divisions received trophies, prizes and scholarship funds. Each champion, as well as the second and third place finishers in the 18-and-under boys’ division earned an opportunity to represent the United States in the 2012 World Pool-Billiard Association (WPA) World Junior 9-Ball Championships. Prizes were also given to all top eight finishers in each division.

During the BEF annual banquet, 300 attending players, family members and fans were honored and thrilled to have Allison “Duchess of Doom” Fisher share words of inspiration and enjoyed an evening of instruction and challenge matches. Fisher is currently ranked #1 on the Women’s Professional Billiard Association (WPBA) tour, fifteen (15) times World Champion and recipient of over 75 major titles. Other special guests in attendance throughout the week were BCA Master Instructor, Jerry Briesath, who worked tirelessly with juniors who were interested in perfecting their game and Mark Wilson, professional player, instructor and Lindenwood University Billiard Coach.

A special “thank you” to all of the event sponsors who made the 2012 Junior National 9-Ball Championships possible: Simonis Cloth, Billiard Congress of America (BCA), Romine’s High Pockets and the BEF. Also, much gratitude goes to Viking Cue, sponsor of the Academic All-American awards. A hearty “thank you” goes out to all the product donors who contributed to the junior prizes. A list of donors can be viewed on the BEF website at www.BilliardEducation.org.

2nd Taylor Reynolds of Winslow, ME

4th Carly Fristoe of Bend, OR

Names for the photos are: