Gerda Hofstatter won the opening lag and break, pocketing the six and playing safe. Fisher missed the kick and with ball in hand, Gerda ran the rack to lead 1-0, but lost the safety battle in the next rack to give Allison her first game. Gerda got back to the table in game three, but Gerda missed a tough 8, leaving Allison a bank on the eight and an easy nine to pull ahead 2-1.

In rack four, Gerda made a classic two ball shot, only to be called a foul. She protested the call and officials reviewed on the ESPN cameras and the call was reversed! She then proceeded to make a brilliant run-out to tie the match 2-2.

The match tied again at 3-3, but then Allison took advantage of a foul and a 3-9 combo to lead 4-3, followed by a break and run to take the first two game lead in the match 5-3. In the ninth rack she won an early safety battle and ran out from the two ball to get to the hill 6-3.

In the final rack, Allison had a dry break but Gerda missed a long cut on the 2. Allison was hooked, kicked to safe. Gerda left a shot though and Allison ran out to win her record 6th US Open title!

The quarter final, semi final and final matches of the WPBA US Open 9-Ball Championships will be broadcast by ESPN in seven one-hour national shows, airing Saturday, July 14, (Quarterfinals 12-4pm on ESPN2) and Sunday, July 15, (Semifinals/Final 1-4pm on ESPN2).

Fans and media view all final results at http://www.wpba.com/images/stories/brackets/2012_us_open.pdf. 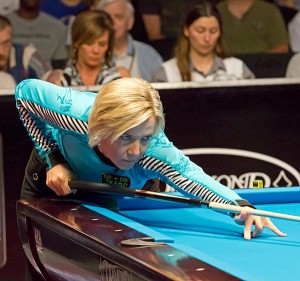 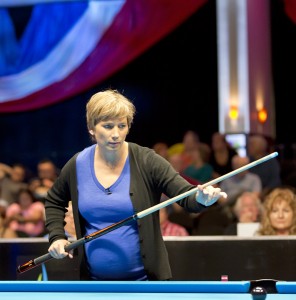 Above, champion Allison Fisher and at right, runner-up Gerda Hofstatter.

About River Spirit Casino and Event Center
River Spirit Casino, Tulsa’s $195 million casino project at 81st & Riverside, showcases 300,000 square feet of gaming space and is one of the largest gaming floors in Oklahoma. With over 2,600 high-tech electronic machines, 23 table games and 15 poker tables, River Spirit Casino offers the most current technology and latest games available. The facility features four dining and beverage venues including the largest casino buffet in Oklahoma, a steakhouse, a 24-hour cafÃ©, a lounge and a sports bar.  The newly renovated River Spirit Event Center is located at the site of the former Creek Nation Casino – Tulsa at 81st and Riverside Drive. The venue has nearly 20,000 sq. ft of useable space for sporting events, entertainment, conventions and meetings and all amenities. For more information on River Spirit Casino visit www.riverspirittulsa.com.

As an active community partner, River Spirit Casino provides a positive economic impact for Tulsa and surrounding towns. Proceeds from gaming operations help to fund a variety of Muscogee (Creek) Nation service programs such as housing, education, elderly assistance and healthcare. For more information on the tribe’s history and government, please visit the Muscogee (Creek) Nation’s Web site at www.muscogeenation-nsn.gov.