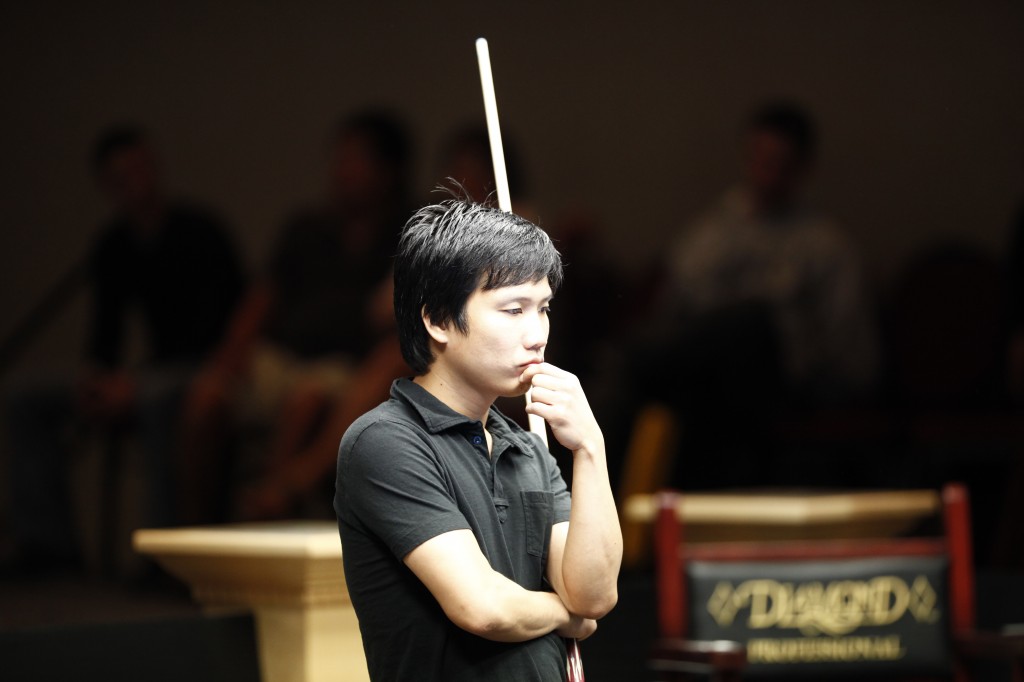 Named for beloved southern California player, Jay Swanson, the 16th Annual Jay Swanson Memorial 9-Ball Tournament (“the Swanee”) was hosted February 4-5 at Hard Times Billiards in Bellflower, California. A tournament steeped in tradition, the event is a virtual who’s who of west coast US and Pacific Rim players. Produced by CueSports International (CSI) and sponsored by Hard Times Billiards, CSI and the Magic Ball Rack, the event is known for being a two day grinder with a heady 192 player field of heavy hitters.

It is no small feat to cash in this event, but this year history took place. Alex “The Lion” Pagulayan won for a second consecutive year surviving a litany of fellow well known names including former Swanee champions Dave Hemmah (1996), Mitch Ellerman (2009), Amar Kang (2006) and the only other two time winner Morro Paez (1999 and 2001). Additionally, “The Lion” took out 2012 US Mosconi Cup team member Rodney Morris and “Mad Max” Eberle who himself has finished in the top three of the Swanee field 3 years (2005, 2011, and 2012). It was Eberle who initially knocked Pagulayan to the one loss side in the seventh round of the winner’s bracket. “The Lion” heaped revenge upon Eberle in the semi-finals sending “Mad Max” to the bleachers late Sunday night 7-2.

After two days and 16 rounds the 192 field was now down to two players. In the middle of the night surrounded by a room full of dedicated spectators, the single race to 11 finals was between Oscar “The Big O” Dominguez and Pagulayan. Dominguez’s road to the hot seat included the take down of Nick Spano, Corey Harper, Jim Hennessy, Brendan Crockett, Santos Sambajon Jr., Rodney Morris and Max Eberle.

In what can only be described as one of the most unique finals of any tournament, Pagulayan’s repeat win almost did not take place. “The Lion” dominated the match early and jumped to a quick 10-3 lead. Then in game 14 “The Lion” pocketed a tough but makeable back cut shot on the 9-ball for the match win. However, in a split second it was evident the cue ball would also drop giving Dominguez the game instead of Pagulayan the win.

The diminutive Pagulayan leaped in the air just as whitey wailed into a corner pocket. To add injury to insult when Pagulayan landed from his leap he sprained his calf and faced the rest of the match limping and having to adjust his stance to avoid further pain.  Dominguez capitalized on the situation. Using strategic safety play “O” patiently took the score from 10-4 to 10-9. During those 5 games Pagulayan did have another opportunity to seal the deal but in a case of dÃ©jÃ -vu again scratched on a pocketed 9-ball. The cue ball caught the tip of one pocket and ricochet the ball into another pocket. In this situation it is hard not to think of that famous quote “It’s like a nightmare, isn’t it?” from The Color of Money.

The winning game came down to a moment of luck or redemption depending on the perspective. Dominguez again executed a strong safe leaving Pagulayan in the unenviable position of having to kick at the 1-ball for legal contact. Using sonic speed, Pagulayan sent the cue ball off a long rail, hit the one, then the rock careened off the opposite long rail into the pack of balls that housed the 9. The match money ball then gently rolled into a side pocket. This time whitey stayed securely on the table and “The Lion” was able to roar two years in a row.

CueSports International (CSI) is dedicated to creating more choices for all players. In the past seven years CSI has directly paid out approximately seven million dollars to players. CSI is the parent company of the BCA Pool League and the USA Pool League. CSI also produces independent events such as the US Bar Table Championships, the Jay Swanson Memorial, the US Open One Pocket Championship and the US Open 10-Ball Championship. Visit www.playcsipool.com, www.playbca.com and www.playusapool.com for more information about CSI and its divisions.

CSI leads the billiard industry in the development of technology. For more information on the state-of-the-art software systems for league and tournament management visit www.leaguesys.net and www.ctsondemand.com.