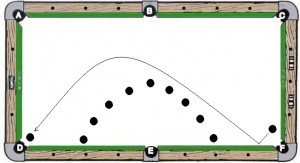 By Eric “The Preacher” Yow

As many of you know, it is easy to reach a level of play where you feel as if you cannot continue to improve much more without really stretching your limits.  If you have been following my articles about the masse for the last few years, for instance, you have likely become quite proficient at the masse.  You may reach the point where it seems as if there’s no masse you cannot make, with enough practice.

What I try to do is stretch the limits by taking a great shot and making it even greater.  For instance, the rainbow masse is one of which I have written in this same column several years ago.  In it, you attempt to masse from one corner to the middle of the table, then curve to the far corner on the same side, curving around a rainbow-like arch of balls.  To stretch the limits even further, try making the same shot by shooting into the near long rail first, causing the cue ball to shoot across the table like a bank, then curve toward the target.

This shot is quite a bit more difficult for a number of reasons.  First, because you are shooting a masse and with plenty of power (depending on the speed of the cloth), the cue ball will tend to bounce off of the slate after you strike it.  It may land on the rail or hit the rail at or just below the equator of the ball.  Each of these circumstances will change the trajectory of the rebound.  Secondly, the cushion will absorb some of the energy of the shot so striking the cue ball with the appropriate power is crucial.  Given the number of variables, it becomes increasingly difficult to make the shot with repetition.  With practice, though, you will learn to find an aim point and stick with it.  I like to assume a 45 degree angle of incidence and angle of rebound, starting with the cue ball a specified distance from the rail.

The distance and angle are not terribly important, so long as you do not change either variable from shot to shot.  (Any more angle, however, and you will need to put some forward spin on the ball, which is difficult in a masse.)   Shoot with 80 degrees of elevation, striking the cue ball hard at 9:00.  Keep a loose grip and loose bridge, so the cue can be removed from the path of the cue ball as you strike the ball.  Pay close attention to the bounce of the cue ball and adjust your power accordingly.

If it bounces too much and lands on the rail, back down the power.  If it lands just before the rail and hits it level, don’t change the power.  Good luck!  Remember to check out the Eric Yow Masse Cue for sale at www.joerackem.com!