Mike Sigel #1 : Round Robin Concludes at The World Tournament 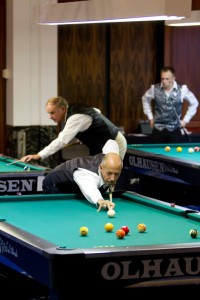 New Brunswick, New Jersey-  The Captain’s back. Mike Sigel put on a renaissance 14.1 clinic in his first 7 matches of The World Tournament of 14.1. He showed no mercy or weakness and pounded on all of his opponents showing why he is considered by many as one of the greatest ever.

Sigel held 3 of his opponents to a rack or less. Jose Parica faired better getting 16 points. Ray Martin came the closest at 72. The big one was when Sigel shutout defending champion Ortmann 100-0.

Three other players finished undefeated in their group including Thorsten Hohmann (seeded #2 in the final 32 chart), Rodney Morris (#3), and Charlie Williams (#4).  But Sigel had the #1 seed locked up by a landslide. Sigel will face the #32 seed Jonathan Smith tomorrow . If Sigel wins that match and 2 more, he will find himself in the final four. A first in many decades.

Allen Hopkins nearly went undefeated except for his lost to israel’s Zion Zvi. Hopkins put on a good show against Immonen winning 100-83 after trailing 40 points early on. He also defeated Dennis Hatch 100-49. Immonen and Hatch still made it through.

Charlie Williams had a see-saw match with Japan’s Takahashi where both players held leads against one another. Williams eventually won the match 100-76.  Other notable results included senior player Dave Daya handing Alex Pagulayan his only blemish 100-68. Ed Deska surprised John Schmidt by defeating him 100-82.

The format is now going to the 32 man single elimination stage race to 200 points. Marquee matches will be streamed on www.insidepoolmag.com starting at 10:00am EST.  First match of the day will be Immonen vs Schmidt.

Checkout www.worldstraightpool.com for full group results , charts, and other 14.1 news from the event 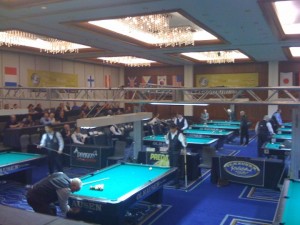 The 71st World Tournament Arena at the Hyatt Regency

For the sixth straight year, Dragon Promotions will produce the 71st Annual World Tournament of Straight Pool August 28- September 2 .  In partnership with the support of Dr.Michael Fedak, this year’s event will have the biggest payout in straight pool history with $20,000 going to the champion. The event is $35,000 added , boasting a total $70,000 in the prize fund. Predator Cues will also be sponsoring the event for the sixth straight year at the luxurious Hyatt Regency in New Brunswick, NJ.  Once again the greatest straight pool players from around the world will arrive on USA’s east coast again to attend this prestigious event. Their common goal will be to play for the coveted World Tournament of 14.1 title and be recognized as the #1 Straight Pool Player on Earth. The World Tournament is the oldest tournament in history that still exists today. Invented by Jerome Keough and shortly after recognized as the official game of billiards. The first World 14.1 Tournament was held in 1911 and won by Alfredo DeOro. In its history due to war and economics, the World Championships had 29 tournaments that did not take place including a 15 year gap between 1990-2005 until Dragon Promotions revived the game and the World Tournament in 2006.