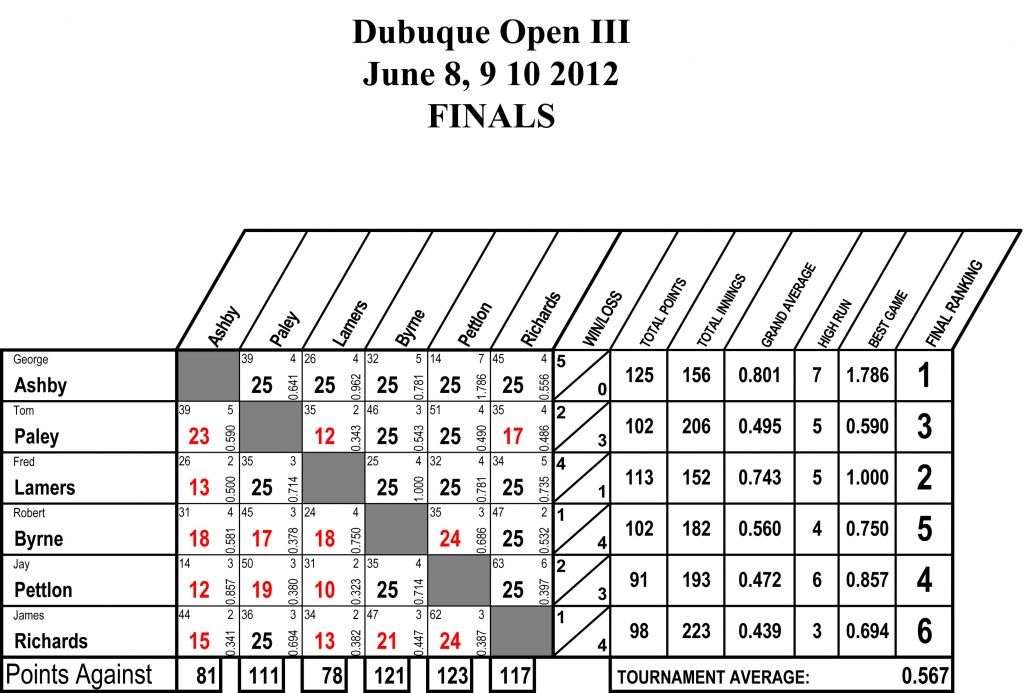 Eighteen three-cushion players from seven states gathered in Iowa on June 8, 9, & 10 for the third annual Dubuque Open.  The competition was played on three reconditioned Brunswick tables in the Masonic Temple’s majestic billiard room.            Favorites going in were George Ashby of Murrayville, Illinois, who won the national tournament in 1976, 1981, and 1984, and Fred Lamers of the Minneapolis Billiard Club, who won the Dubuque Open the last two years.  As many predicted, the two made it to the championship game.

The format of the tournament was typical for a three-cushion event.  The top two from each of three flights advanced to final six-man round-robin.  Players were chosen for the flights by blind draw except for Ashby and Lamers, who were put in separate flights.

In flight A, Lamers was upset in the early going by Tom Paley 25-15 in 39 innings, but won his other four matches to finish first.  Paley also advanced to the finals.

Flight B saw Ashby sweep, tested only by tournament host Bob Byrne, who managed 21 points in his only loss.  Ashby averaged .740 in his five wins.

Flight C caused some excitement when Jay Pettlon beat Bob Keller 25-3 in only 22 innings.  He cooled off after that eruption, finishing the flight with an average of .607.  His only loss was 25-22 to James Richards, who joined him in the finals.

The two tournament favorites advanced unscathed through the finals, meeting for the title late Sunday afternoon.  It was 14 to 9 in favor of Ashby after 15 innings, and in the following 11 innings he outscored Lamers 11 to 4 to take the game 25-13 in 26 innings and the first prize of $620. The champion also won cash prizes for the high run of 7 and the best game of 25 points in 14 innings, both scored against Pettlon.    For the five-game finals, Ashby averaged .801.

The award for best game out of the money went to Russ Rosenberg for his 42-inning win over Gary Eake.  The prize for the high run of 6 out of the money was shared by Doug Taber, T.R. McElligott, and Greg Vavra.

Had there been a prize for coming the greatest distance, it would have gone to Dave Ehlers, who came from Washington state.  Runner-up in that category was Jack Leitzinger of Kettering, Ohio.  In the field were six players from the Minneapolis Billiard Club, including Mickey Campbell, a member of the Sioux Nation, who came within one win of making the finals.