An American Will Make the Finals: Ortmann Ousted by Williams

The big story of the day was the elimination of defending World Champion Oliver Ortmann. Ortmann has been the most decorated 14.1 player in the new millenium and the favorite to win this year. He eliminated Japanese champ Kunihiko Takahashi with a 120 ball run. But against Williams he could not get any runs going. Williams didn’t play spectacular, but played steady. In the end, Williams capitalized on Ortmann’s final mistake and won 200-151.  Williams also handed Ortmann his only loss last year in the double elimination stage, but Ortmann still won the event.

“I had mixed emotions before the match. The promoter part of me wants Oliver to advance because the fans want to watch him. Including me!” explained Williams. “But I’m also a professional and have to do my very best.”

Max Eberle eliminated Ray Martin in a one sided affair. But Martin got a round of applause as fans said goodbye to their former World Champion in perhaps his final 14.1 event.

Alex Pagulayan and Rodney Morris played a lackluster quarter finals as both players suffered from fatigue. They had both pocketed 400 balls that day. After many innings, Alex closed the door and won to advance to the semi-finals. This is the third time a Filipino has made it this far. Orcullo and Bustamante also made it to the final four before.

Thorsten Hohmann seemed to be the only players not worn out. He defeated Danny Mastermaker including a 134 ball high run. Then he defeated Dennis Hatch. And next he ran another 127 balls on Lipsky, before finally winning to advance to the semi-finals against Pagulayan tomorrow.

Mike Davis got passed Earl Herring (who eliminated Hopkins) by  a big leap score. Then he defeated Mike Sigel by a 100 point margin.

One quarter final match remains with Archer vs Williams. The winner will play Davis which assures USA a finals berth !(finally) 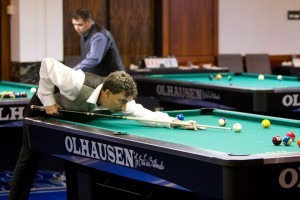 Fans can catch the streaming at www.insidepoolmag.com

Checkout www.worldstraightpool.com for full group results and other 14.1 news from the event

For the sixth straight year, Dragon Promotions will produce the 71st Annual World Tournament of Straight Pool August 28- September 2 .  In partnership with the support of Dr.Michael Fedak, this year’s event will have the biggest payout in straight pool history with $20,000 going to the champion. The event is $35,000 added , boasting a total $70,000 in the prize fund. Predator Cues will also be sponsoring the event for the sixth straight year at the luxurious Hyatt Regency in New Brunswick, NJ.  Once again the greatest straight pool players from around the world will arrive on USA’s east coast again to attend this prestigious event. Their common goal will be to play for the coveted World Tournament of 14.1 title and be recognized as the #1 Straight Pool Player on Earth. The World Tournament is the oldest tournament in history that still exists today. Invented by Jerome Keough and shortly after recognized as the official game of billiards. The first World 14.1 Tournament was held in 1911 and won by Alfredo DeOro. In its history due to war and economics, the World Championships had 29 tournaments that did not take place including a 15 year gap between 1990-2005 until Dragon Promotions revived the game and the World Tournament in 2006.