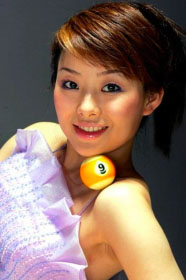 Fury Cues is proud to announce the addition of their most recent pro player representative, Xiao-Ting Pan. Pan’s talent and growing list of achievements have made her one of the most famous female players in China.

“To have a true international champion such as Xiao-Ting Pan representing Fury Cues is thrilling, and a testament to the progress of craftsmanship Fury Cues have made since they debuted at the Super Billiards Expo in 2003” says Matt Carter, general manager of Sterling Gaming, the exclusive distributor for Fury Cues in North America. “Pan joins American John Schmidt and UK native Kelly Fisher as world champions who stake their careers on the quality of Fury Cues and we are very excited about what the future holds for this talented group of players.”