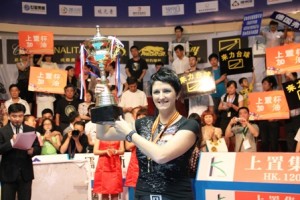 (Shenyang, China)–Capping an all around solid week of pool with yet another air tight performance, Britain’s Kelly Fisher won the 2012 WPA Women’s World 9-ball Championship with an emphatic 9-6 victory over Chinese superstar Fu Xiaofang,  in front of a packed house inside the Richgate Shopping Center in this northeastern Chinese city.

With the victory Fisher now holds the distinction of being the only woman to ever hold the World 9 ball and World 10-ball Championships all at the same time.  But perhaps more importantly, the win cemented Fisher’s status as the hottest player in the women’s game right now, and is a lasting testament to years of toil, long travel and plenty of near misses to go along with a lot of W’s.   With the victory she will now claim the mantle of WPA World Number 1.

It was an all-around brilliant Thursday for the 34 year old from Yorkshire, as she took down two huge names in Chinese pool on their own turf.  The opening salvo came with a dramatic match against 2009 World 9-ball Champion Liu Shasha in the semi-finals.  Fisher had to slog it out for over two hours and the contest went down to the last ball, with Fisher claiming a heart stopping 9-8 win by a whisker.

The final started well for both players. Fisher won the lag and broke and ran for the early lead. Fu stepped up and did the same to tie the match at 1-1.

Fu then stepped on the gas for the next twenty minutes, performing perfectly, winning two safety battles sandwiched around a break and run, to go up 4-1.

Fu had clearly caught a gear and was well on her way to clearing the next rack for a massive 5-1 lead. But as she stretched far over the table to line up a shot, the referee called a foul, saying she had touched a ball with her shooting hand.

As so happens in pool, one small incident mysteriously sends the momentum, and the roll of the balls, over to the other side. Fisher cleared the table to cut the lead to 4-2. She then caught a break in the subsequent rack when an over-hit cue happened to land on a 6-9 combination, which she nailed.

Fu then missed a long one ball and Fisher cleared to tie at 4-4. In rack 9, Fisher grabbed her first lead at 5-4 when Fu left a safety open.

After the pair traded break and runs, Fisher started tightening the screws. She won the next rack after she buried Fu in a lockdown safety, forcing Fu to scratch. With Fisher up 7-5, Fu lost another when she inexplicably failed to hit a rail after trying to hide the balls.

Fu cut the score to 8-6 but Fisher went out in style with a break and run to reach the holy grail. But as the last 9 ball fell, Fisher didn’t realize that she had won, as she thought match was a race to 11.  Only when she looked up and saw Fu shaking her hand and the photographers furiously  snapping photos did she realize she was the new World 9-ball Champion.

After receiving the golden trophy and drinking in the accolades from the throng of fans, an ecstatic Fisher said she was not only happy with her accomplishment, but also with the way she did it.

As usual with all the Chinese pool stars, Fu was the model of graciousness in defeat.  She admitted, however, that the foul in rack six affected her frame of mind.

“After I fouled, the match seemed to change,” she said. “And my emotions changed. I wasn’t the same after that.”

Fu also confessed that playing in a world championship final in China with millions of fans expecting her to win brought on almost unbearable pressure. 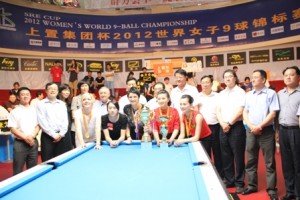 “The finals were stressful,” Fu said. “I’m Chinese and everyone in China wants me to win.”

Fisher, who pocketed $40,000 for her win,  pointed to Fu’s foul in rack six as the point where the match turned.  But after a week where she played brilliantly and won two 9-8 thrillers in the knockout stage, the new world champion figured there must be a much bigger picture involved.

“She was playing well until that foul,” Fisher said. “That was the turning point. But you know this week somebody has been by my side.”