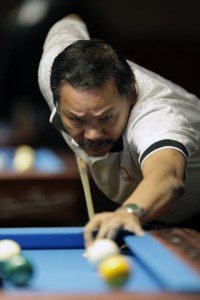 *PHOTO of Efren Reyes at the 12th U.S. Open One Pocket Championship courtesy of Dale Shank of ShankShotMedia.com

“The Magician” Efren Reyes went undefeated through the full 64-player field to become the 2011 (12th) U.S. Open One Pocket Champion at the Riviera Hotel and Casino in Las Vegas, Nevada. Produced by CueSports International, the $10,000 added event drew the finest one pocket players from around the world as well a sophisticated room full of spectators. Reyes defeated poker star Chris Gentile in the single set finals 5-2. This was Gentile’s first U.S. Open One Pocket and his most successful finish in a major one pocket event.

Gentile had an impressive showing, besting Mike Davis 4-1 and Rafael Martinez 4-3. To enter the semi-finals, Gentile narrowly avoided a loss to “The Pearl” Earl Strickland when he came back from being down 3-0 to win 4-3. In the a-side finals, Gentile’s run was halted by Reyes. Reyes took a quick lead 3-1 after an unfortunate scratch by Gentile. After an aggressive cut shot on the 3 ball, Reyes gave up game five but had the break up 3-2. Gentile chipped away at the stack and responded to Reyes’s moves but in the end, the magician worked his magic and closed out the set.

Alex Pagulayan had a rough start, losing 4-0 to Jeremy Jones, only pocketing two balls the entire set. “I’m just not feeling it. I better figure it out,” he said after the match. Pagulayan went on to win nine straight matches on the b-side before meeting up with Gentile in the semi-finals early Sunday night. The players exchanged moves and put on a clinic for the fans but Gentile would advance to meet Reyes in the finals.

With a game like one pocket, predicting match times and schedules can be tricky. This event ran smoothly under the direction of Bill Stock, Ken Schuman, and John Leyman. With the U.S. Open One Pocket now concluded the 3rd U.S. Open 10-Ball Championship swings into gear starting Monday, May 16th with the player’s meeting at 4 pm and two rounds scheduled at 6 pm and 8:30 pm.

Once again The Action Report (TAR) will be live streaming the great action from the CSI pro arena via PPV at the Riviera Hotel & Casino Convention Center at www.theactionreport.com. To view the full detailed brackets, payouts and live scoring for both the 12th U.S. Open One Pocket and the 3rd U.S. Open 10-Ball Championships visit CSI’s CueSports Tournament System (CTS) at www.ctsondemand.com.

CueSports International is dedicated to creating more choices for all players. CSI is the parent company of the BCA Pool League and the USA Pool League. CSI also produces independent events such as the U.S. Bar Table Championships, the Jay Swanson Memorial, the U.S. Open One Pocket Championship and the U.S. Open 10-Ball Championship. Visit www.playcsipool.com, www.playbca.com and www.playusapool.com for more information about CSI and its divisions.