Carbin Completes Brooklyn Snooker Double
After his victory in Event 1 of the 2011 United States Snooker Association Tour (USSA), sponsored by Aramith Billiard Balls and Strachan West Of England snooker cloth, Paul Carbin has completed the Brooklyn double this year with victory in Event 4 at the Top 147 Snooker Club. 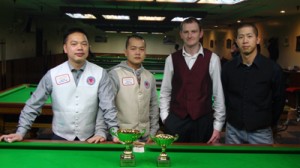 Carbin was again in the fine form that helped him win Tour Event 1 at the Prince Snooker Club back in February, as he came through the tournament without the loss of a single frame. The Irishman topped Group B with 2-0 victories over Tim Lee, Raymond Cheung and Peter Chen, to then advance into a quarterfinal match-up against the runner-up of Group C, Paul Ye. Carbin then proceeded to cruise past Ye 3-0, and then to a 3-0 semifinal win over Kevin Wong and onto a 4-0 demolition of Chen Qing in the final.

Chen’s route to the final encountered a few more obstacles, as he finished runner-up in Group A with only one win from his three group matches, but once he advanced into the quarterfinals his performances improved. He scored an excellent 3-1 success over last year’s United States National Snooker Championship quarterfinalist, Henry Wong, who won Group D, and then a tremendous 3-0 victory over the semifinalist in that same event, Jian Qiang Wang.

Wong and Jian both won their respective groups before their progress was halted in the semifinals. Wong, who was also a losing semifinalist in this Tour event last year, won all three of his Group A ties, and then defeated Nelson Chan, who placed runner-up in Group D, by a 3-0 scoreline. Jian has been a very accomplished player over the past few years in both USSA National and Tour events, and as expected won all of his three group matches to claim the top spot in Group C. He then proceeded to overcome Tim Lee 3-1, who was runner-up in Group B and a losing semifinalist in this Tour event last year.

The USSA would like to give its thanks to all the participants of this event, and also to the proprietors of the Top 147 Snooker Club for their valuable continued support in hosting yet another successful USSA Tour event.

The USSA Tour next moves back to California for a new event to be staged at E-1 Entertainment in San Leandro over the weekend of April 16 & 17.