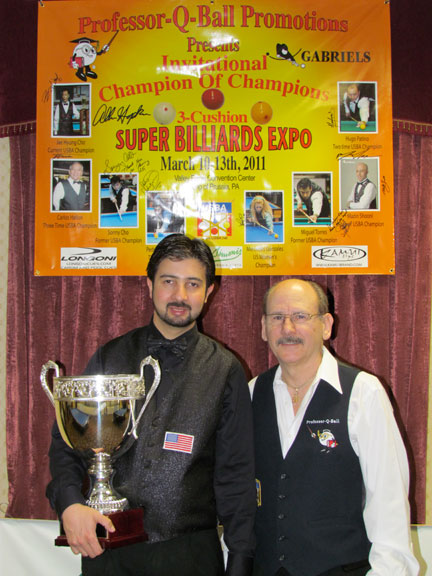 A buzz was in the air as the country’s champion three-cushion players arrived for a showdown that promised to keep the viewers on the edges of their seats.   Sponsored by Allen Hopkins Productions and Professor-Q-Ball Promotions, Champion of Champions invited the eight most recent U.S. national champions and asked them to show what they were made of in forty-point matches in a round-robin to see who was the best of the best.  And show us they did – history was made as Piedrabuena outplayed the entire field with a dominance that we haven’t seen at a national championship or other open tournaments in the U.S. since the passing of the great Sang Chun Lee in 2004.

The players performed magic with their cues on two top-of-the-line Imperator Gabriel Tables, which are the most renowned tables in Gabriel’s history. The craftsmanship and superior technique of this table exceeds the demanding play standards of billiard players around the world. Mechanic Yura Ra of New Jersey made sure the tables were set up a day before the event, complete with new Simonis 300 cloth, so players had enough time to practice before the action started.

“It was first class all the way, from the chandeliers lighting the room to the elite players working the tables at the “Champion of Champions” in Valley Forge.  Above, USA’s Women’s 3-Cushion Champion Mercedes Gonzales studies her options, while the country’s 2006 Men’s Champion Mazin Shooni (background) takes a shot.  The audience was captivated by the skill and showmanship of the country’s top 3-cushion players as they battled it out in one of the most memorable 3-Cushion tournaments of all time.”

While Piedrabuena was at his peak, all of the players wielded a mean cue at the tournament.  The final results behind Piedrabuena were 2nd – Hugo PatiÃ±o;  3rd – Jae Cho; 4th – Mazin Shooni; 5th – Miguel Torres; 6th – Sonny Cho; 7th – Carlos Hallon; and 8th – Mercedes Gonzales.

The Champion of Champions has set the bar high for the future of three-cushion Billiards in the United States.  Not only was the tournament flawlessly and professionally run by Director Charlie Brown of New York, the players set a new standard for performance.  Over the course of seven forty-point matches,

Paul Frankel would like to thank all who donated their time by keeping score, commentating, setting up and taking down tables, etc., to help make the tournament run smoothly.  To the Champion of Champions official sponsors – Simonis, Kamui, Longoni Cues, Gabriels – all the people who donated financially and Allen Hopkins Productions, Paul extends “a big thank you from the bottom of my heart.” 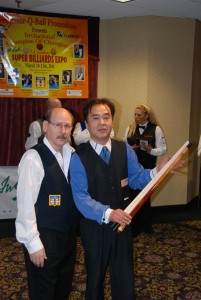 All eight champions competing were eligible and all had an equal chance by a random draw to win this spectacular carom cue by Longoni Cues.

Champion of Champions was live-streamed by Mi_Billiards (Steve Elzinga and Mike (Curly) Christenson). All matches have been archived here, http://www.ustream.tv/user/Mi_Billiards/videos and can be watched as PPV, PayPal required.  DVDs of all matches on the feature table will, also, be available, contact them at Mi_Billiards@yahoo.com for information

Steve and Curly donate their time and efforts to bring you these live streams, please consider purchasing the PPV archives or DVDs to support their continuing quest to improve the quality of the live streams.