Finals: 2 groups of 6
Top 2 from each group play single elimination 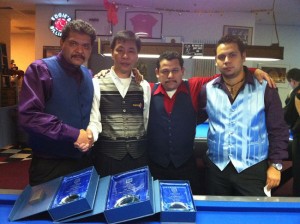