SAVING THE DAY FOR THE USA

STORY AND PHOTOS BY TED LERNER 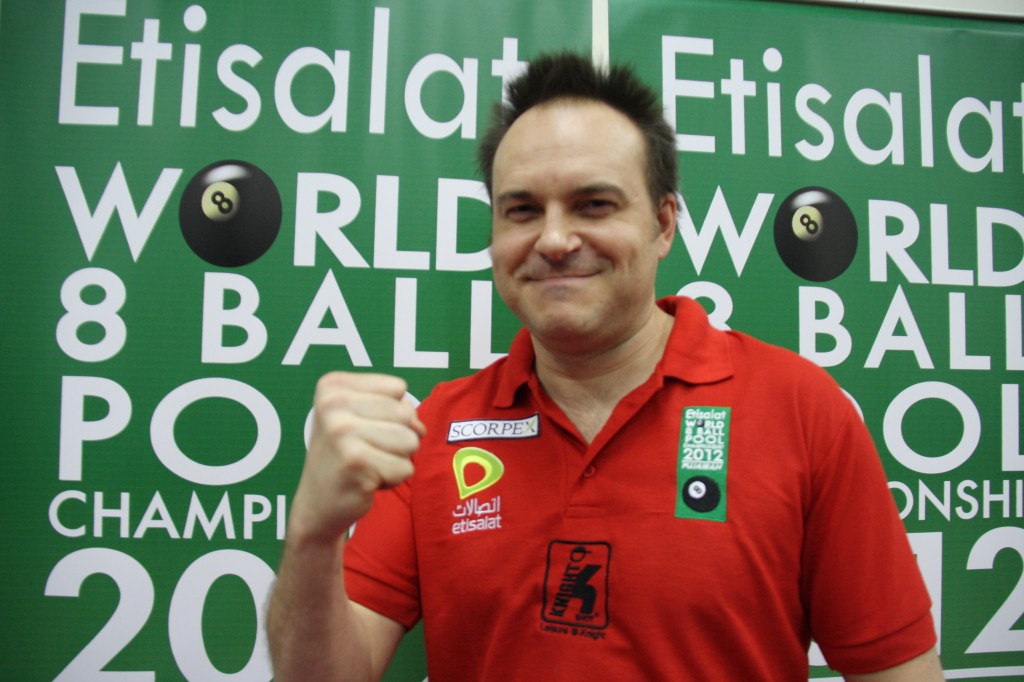 (Fujairah, UAE)–Facing elimination, and bearing the burden of having to carry the hopes of the United States squarely on his shoulders, Max Eberle proved his mettle tonight at the Fujairah Tennis and Country club, pulling out a hard fought come from behind 7-4 win over Singapore’s Kwang Chan Ken to advance to the round of 64 knockout stage at the 2012 World 8-ball Championship.

Eberle, who originally hails from Ohio but now resides in Las Vegas, is now the sole American left in this year’s World 8-ball Championship. The single elimination knockout stage begins on Wednesday at 2pm(GMT +4). All matches will be race to 9, alternate break.

Eberle went into his do or die late night match already knowing he had to carry the flag for the red, white and blue. Moments earlier, Brandon Shuff, the only other American in this year’s competition, blew a golden opportunity to take down the Netherland’s Nick Van den Berg on the TV table. Shuff was clearing the table with the score tied at 5 and played poor position with just three balls left on the table, leading to a scratch. Van den Berg went up 6-5, then broke and ran for the 7-5 win.

“I dogged it,” a gutted Shuff said afterward.  Things were looking dire for Eberle as well before he decided enough was enough. Leading 3-0, Eberle suffered several dry breaks and soon found himself down 4-3. Then the fight back began.  “Mad Max” won four straight racks for the win.

“It was a gritty win,” a delighted Eberle said afterward. “I had to bear down and pull out some good run outs. I really fought hard and it feels good. America still has hope. I have to pull it out for the USA.”

It won’t be easy, though. Eberle has drawn none other than Hall of Famer Ralf Souquet in his first match in the round of 64. That match is scheduled for 4pm Fujairah time.(GMT +4) 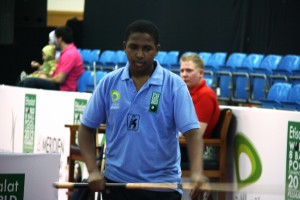 The youngster was playing lights out pool in that fearless way that only a juvenile can do, while Peach   played horribly all match. Tied at 5 all, Peach had only the 8 ball left to go up by one, only to scratch after potting the black pearl. This put the kid on the hill with the break, but he broke dry and Peach cleared.  Peach nearly gave it away in the decider, but fear and nerves finally caught up with Saed Saed and he blew a certain win with awful position, leaving Peach an easy run out.

“That was the worst match of pool I’ve ever played,” a somewhat stunned Peach said afterward.

The unique World Championship-style pressure seemed to infect many of the tables in the evening session.  Aoki Ryoji from Japan and  Jayson Shaw of Great Britain went down to the wire, with Ryoji pulling out a 7-6 squeaker.  Hamzah Ali, the first and only pro pool player to come out of the African country of Eritrea came from 6-3 down to take Spain’s Carlos Cabello to a one game decider. Hamzah got down to the 8-ball but missed a golden opportunity for pool glory when he missed, leaving a clear and win for the Spaniard.

The remaining three days of this year’s World 8-ball Championship promise plenty of nerves, tension and fireworks as most of pool’s big names made it through. It’s almost assured to see a Filipino in the final four at least as all nine Filipino players entered into the tournament qualified for the final 64. These include defending champion Dennis Orcullo, Lee Van Corteza, Roberto Gomez, Carlo Biado, Joven Alba, Elmer Haya, Ramund Faoron, Demosthenes Pulpul, and Elvis Calasang.

Fans around the world can follow all the action from 2012 World 8-ball Championship in Fujairah on the WPA website  www.wpa-pool.com. The WPA will be providing  live scoring of all matches, in depth articles on the goings-on posted several times a day, as well as blow by blow coverage of big matches via the WPA’s Twitter page, @poolwpa.

*The World Pool and Billiard Association(WPA) is the world governing body of the sport of pool. The WPA is also the member organization for pool of the World Confederation of Billiard Sports (WCBS), the international umbrella organization encompassing all the major cue sports.

Losers Side Matches From Day 2
(Winner is through to Final 64, Loser is out)