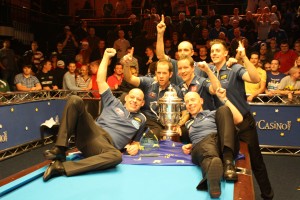 EUROPE are the 2010 PartyCasino.com Mosconi Cup champions after Darren Appleton and then Ralf Souquet took the requisite two points to see their side over the line for their third triumph in four years.

It was Souquet who downed the winning 9 ball – a repeat of the 2007 event when he beat Rodney Morris for an 11-8 win. This time his victim was Corey Deuel and the York Hall erupted as the German’s team mates charged into the arena for some wild celebrations.

“This is the greatest feeling on earth to make the final 9-ball and make us win, “said a jubilant Souquet.

The MVP Award went to Darren Appleton who won the hearts of the crowd with a string of marvellous performances filled with superb shot making under pressure. His record of two singles and two doubles points with a single defeat was unmatched by any other player in the event.

“You can’t win the Mosconi Cup without playing like a team and the lads have been amazing,” said Appleton.

“I played really well but a massive part of it has been down to the crowd and it was very easy to feed off the crowd – the bigger the crowd the better I play.

“We had a lead overnight and that set us up for today and the guys played awesome. The emotion is just crazy. We had a great spirit in the camp, the crowd were fantastic and were our sixth man.

“When we came here you just think about playing well for the team and win it for your team and your nation. You don’t think about yourself but obviously it’s a great bonus to win the MVP so I’m very happy with how I played.

“It’s really difficult to get into the European team as there are that many great players. It’s really hard to make the team but hopefully winning the MVP gives me a chance of getting in next year’s event as well.”

For captain Johan Ruijsink, it was his third Mosconi Cup following a win in Vegas in ’07 and a draw in Rotterdam in ’06.

“I haven’t lost one yet and it’s an honour to be the European captain, but I would like to thank Matchroom for staging such a great event again and thank you to the opponents.

“If they weren’t such worthy opponents it wouldn’t have been such a great Mosconi Cup. Last of all I would like thank my team. They stuck to the plan and we did it.”

England’s Karl Boyes, who was the only rookie in the event, completely dispelled any doubts about his ability to handle it with a string of match-winning performances.

“I’ve watched a lot of Mosconi Cups being a sports fan and everyone has always said Bethnal Green is the place it should be. On the first night I saw the crowd shouting and chanting and it was just unbelievable. Everything has just been awesome,” said Boyes.

The teams entered the evening session with Europe needing two points and the Americans three, and it was Darren Appleton who fired Europe within one point of victory with a stunning performance that put him right in line for the MVP award.

He beat Shane Van Boening 6-2 in what was a 50/50 match on paper but the man from Pontefract put in his best show of the week to put his team on the hill.

Appleton played some magnificent shots under pressure including an eye-catching table length draw shot as he over-whelmed Van Boening. That set the scene for Souquet to bring the Cup home for Europe.

It was a disappointing weekend for the Americans who were always in it but fell away in the critical closing stages.

“They played well so congratulations to the Europeans. They outplayed us all week and we just have to take it and wait for next year,” commented Rodney Morris.

Notes: Matchroom Sport are one of the world’s leading producers of televised sport and are responsible for over 1,000 hours of original programming across a range of nine sports.  Based in the UK and chaired by charismatic founder Barry Hearn, the Mosconi Cup is one of a stable of pool events that include the World Cup of Pool and the World Pool Masters.

The 2010 Mosconi Cup is sponsored by PartyCasino.com, the world’s leading online casino. Tables are supplied by Brunswick Billiards, cloth by Iwan Simonis, Super Aramith balls by Saluc and the Official Cue is Predator.