By Eric “The Preacher” Yow 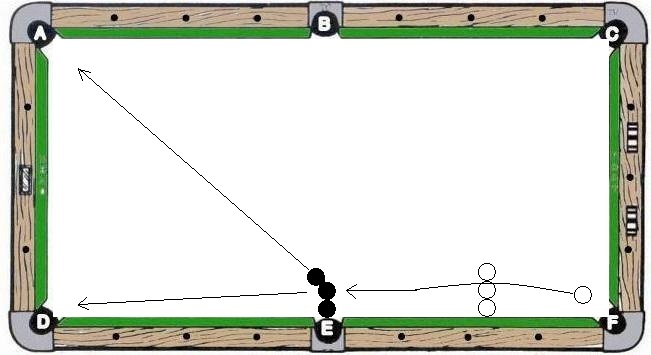 Everyone likes an easy trick shot to keep in their pocket to whip out just to show off from time to time. Sometimes the shots I feature here are quite difficult, but I like to put in some easy ones on occasion. This is a shot that is pretty easy, so long as you set it up right and use a good jump cue. Start by placing the three balls at the side pocket, as diagrammed. The two balls closest to the side pocket are in line, directly across table. Set the third ball up, accounting for a bit of throw, aimed about a diamond short of the corner pocket. With this set-up, you should be able to strike the middle ball and pocket all three with one stroke. The way it is diagrammed, I have you jumping the cue ball over a wall of balls to pocket the easy three. The only trick to this one is planning where the cue ball will land before striking the middle ball. If you hit it too hard or too soft, it changes the throw of the third ball, so practice with a consistent hit and consistent elevation. If you jump too hard and land on the middle ball, it will throw the middle ball too much.

Once you have this shot down, which shouldn’t take too long, you can experiment with all sorts of shots using the three ball combination set-up. I like using the Yow! Jump Cue and experimenting with different sorts of jump shots just to add some flare to the combination and set-up shots. Have fun with these types of shots and pull them out when you want an easy smile from onlookers.