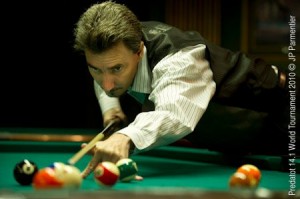 Clifton, New Jersey-  Johnny Archer is showing once again he is no one trick pony. The 9-Ball master Archer ran a perfect 100 ball run to win 100-0 and 100-13 in back to back matches at the Predator World Tournament of 14.1.  This week 48 players worldwide are vying for the Predator World Tournament title in straight pool. This is the 70th edition of the event, making it the world’s oldest tournament.

The World Tournament is being played on beautiful Brunswick Gold Crown tables and using Simonis Cloth. The event started play on October 6,2010 and ends on Columbus Day October 11th. The greatest straight pool players from around the world have arrived on USA’s east coast again to New Jersey, and vying in this prestigious event to win the coveted title of World Straight Pool Champion.  The event is co-sponsored by Amsterdam Billiard Club, Master Chalk, Aramith Balls, www.Ultimate10ball.com, and Accu-Stats.

Archer defeated Peter Burrows in his first match running out from the lag. And then again his next match against Jonni Fulcher. Last year Archer took the bronze in a 3rd place tie at The World Tournament.

In the highly anticipated Accu-Stats TV match, Mike Sigel faced red hot Mika Immonen. Living legend versus rising legend. But it would be a one sided war as Sigel ran rack after rack keeping Immonen in his chair almost the whole match.

But during the run, Sigel was elevated on a jacked up shot over a ball, while the cueball and object ball was very close and he shot and made the ball, with the cueball going forward several inches. But the shot was questionable on whether it was a double hit push or legal. Mika mentioned aloud that it could be a foul, Sigel kept on shooting. There was no referee on the shot, and Mika did not ask for a replay on the video. Sigel continued his run and eventually ran the set with Mika never reaching the table again.

“I believe that was a foul”, Diliberto said during the commentary. The shot was replayed a few times for the filming, but no true conclusion was formed.

Immonen was clearly distraught over the incident. But nothing could be done afterwards.
Sigel has moved on undefeated and Immonen now has a 2 loss and 1 win record and is facing danger in not qualifying for the cut. He will need two wins now and hope that it doesn;t go into a ball count tiebreaker.

Live scoring and brackets will be hosted by www.azbilliards.com and live streaming of the event at www.accu-stats.com
Additional coverage at www.DragonPromotions.com  Info contact worldstraightpoolchampionships@gmail.com

The 2010 Predator World Tournament is proudly sponsored by straight pool aficionados Dr.Louis Pannullo of NYC, Bill Austin of UT, Harold Siegel of NYC, Stu Mattana of NYC, and Badi Nazhat of Curacao. Other significant patrons include Dr.Michael Frank, and Ralph Rubin. Co-Contributors we like to recognize include Dennis Walsh, Bill Marapolus, Peter Burrows, Richard Klein, James Heller, and Jeff Mohl.    For more information on player registration, sponsorship, or if you would like to submit a comment, please email worldstraightpoolchampionships@gmail.com or contact Dragon Promotions at 1-407-782-4978.
Full event info is at www.dragonpromotions.com