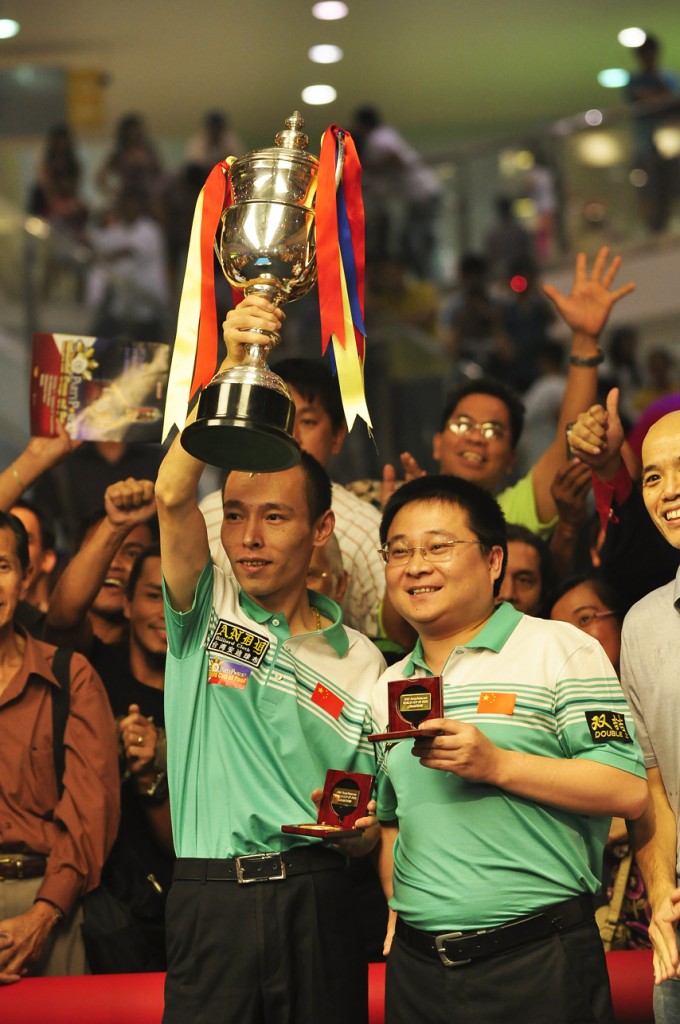 Second Title in Four Years for Fu and Li

CHINA, represented by Fu Jianbo and Li Hewen, won their second PartyPoker.net World Cup of Pool crown as they dismantled the Philippines by a 10-5 scoreline and silenced a huge home crowd at the Robinsons Place Mall in Manila.

It was the second time that the deadly Chinese duo have now lifted this prestigious crown – they beat Finland in a hill-hill thriller in Rotterdam in 2007 – and they never let up from the opening rack as the home team felt the pressure and never really got going.

Over the week of the tournament, the sheer quality of their play throughout shone through and in Fu Jianbo they have one of the most exciting players in the world. Li Hewen though is as reliable as any player and to win the World Cup twice in four years cements their world class credentials.

“We are very happy with the victory but we just got the luck we needed from the Philippines team,” said a reflective Fu Jianbo.

“They made a few mistakes and we took advantage of that. The Philippines team literally gave us the match because they made a lot more mistakes than we did. It was very pressured though, because it was a big pro-Filipino crowd.

“It was like the home court advantage so to win here, we’ve got to be very, very happy winning the tournament,” he added.

For the Philippines side of Dennis Orcollo and Roberto Gomez, it was an anticlimax after their heroic 9-8 defeat of Taiwan in the semis and maybe they were mentally drained by their efforts.

Either way, China took the opening rack to settle their nerves but the Philippines levelled it when their opponents made a mess of the 8 and 9 balls. Every Filipino pot and Chinese miss was greeted with deafening cheers.

It’s hard to under-estimate the pressure the players were under and it showed in a shocking third rack as the four struggled to pot a ball between them as the crowd started to get agitated.

Every single player missed shots they would normally have made. Gomez’s mistake, when he missed the 9-ball into the side pocket, was the most crucial though and Fu Jianbo downed the 9-ball for a 2-1 lead.

The next rack isn’t much better and it went to China to increase their lead and they took the next to go to 4-1 which silenced the huge home crowd.

Orcollo made a huge error in the next when his attempt to snooker the Chinese fell woefully short. Fu Jianbo, normally the most reliable of potters, missed an easy 9 ball but Gomez could only play a less than watertight safety and Li Hewen played a magnificent cut shot to give his side a 5-1 lead.

The Philippines desperately needed a break to stop the runaway train and they got it when Li, scratched pushing out. They tried for the three foul rule but Fu went off three rails for the great escape. Gomez left a poor snooker which Li potted with a kick shot and it was soon 6-1.

It soon became 7-1 as the dynamic Chinese pair ran out from the break. The Philippines finally got a shot at the 1 ball in the ninth as Li hashed up a 1/4 combo. Orcollo though, missed a tough long cut on the 5 ball and China took another rack. China reached the hill as a weak shot from Orcollo left an open table.

Philippines finally won another rack to reduce arrears to 9-2 and they then broke and ran the next two to get the crowd going. It was all too much of a mountain and although they got to five racks, it was the mighty Fu Jianbo who rolled home the final 9 ball of the tournament for Chinese glory.

As well as the title, magnificent trophy and gold medals, the duo also took the US $60,000 top prize.

“It was a great performance from us and playing with Fu gives us so much confidence,” said Li Hewen.

“To win the World Cup again is an incredible experience and fantastic for Chinese pool and we can’t wait to come back next year and try to defend our title,” he added.

With 32 teams representing 31 countries – home nation Philippines has two sides in the competition – the World Cup of Pool sees the gathering of some of the most decorated stars of the pool firmament. The event is taking place at Robinsons Place, in Ermita, Manila.

With a total purse of $250,000, the winning pair split $60,000 between them while first round losers are guaranteed $1,500 each. All the action will be carried live on Solar Sports in

The Philippines and other broadcasters across the region.