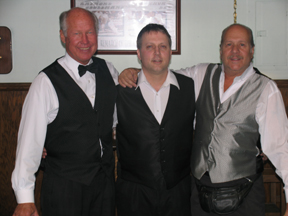 The 2010 USBA TOUR continued at World Class Billiards in Peabody, Massachusetts for an exciting “B” level tournament. Twelve players entered so a round-robin format was used which gave everyone plenty of bang for their buck, eleven matches each in three days.

Dan Kolacz, Dave Van Lokeren, Joe DeAmato and Jim Shovak started their tournaments strongly, all advancing through the early rounds undefeated. Dave Van Lokeren had an early match against John Magulas, going out in just 13 innings for the tournament best game average of 1.923!!! Jim Watson, a tournament favorite, had 2 unexpected losses early on; one to Bob Ferrara and another to Northeast Regional Director Merrill Hughes. With a lot of matches left and some strong players to face, it didn’t look good for Jim Watson, especially after he lost his 3rd time to Bob Page who was also winning all his matches except for an early loss to Joe DeAmato. Jim Watson would turn things around, however.

Dave Van Lokeren had an unexpected loss to newcomer Tony Ferrara who played consistently throughout the tournament and was always a threat. Many of the players were evenly matched  and everyone began to beat each other. Dave Van Lokeren, Bob Page and Joe DeAmato finished Day 2 with 3 losses each. Jim Shovak had 2 losses and Dan Kolacz had just 1 loss going into the final Day.

On Day 3, Jim Watson destroyed Dan Kolacz 25-6 in just 26 innings and Leonard Collibee played strong to defeat both Jim Shovak and Joe DeAmato. With Kolacz and Shovak still needing to play, everything was still wide open.  If Kolacz won, then he would finish in first place, but if he lost, then Dave Van Lokeren would finish 1st, Bob Page would finish 2nd, Jim Shovak would finish in 3rd, and Kolacz would finish in 4th. But Kolacz rose to the occasion, starting off the game with a quick 6 run and another 3 to give him a 9 points to 0 early lead over Shovak. Shovak fought back and got to 18 points but Kolacz played strong, going out in just 27 innings to win the tournament.

It was a lot of fun for everyone who played. Plenty of billiards, plenty of drama, plenty of excitement, plenty of great shots (and not-so-great shots). Everyone was a good sport and supportive of each other.

Dave Van Lokeren earned $50 for his best game of 1.923.
The high run prize of $60 for a run of 7 was split between Dave Van Lokeren, Joe DeAmato and Tony Ferrara.

A special thanks to room owners Joe DeAmato and John Magulas for their hospitality and donated money to the prize fund. Thanks to Merrill Hughes who ran most of the tournament, making sure all the scores were recorded and getting the players onto the table. Also to PJ, a local player, for making sure that all the tables were vacuumed and the balls were cleaned.