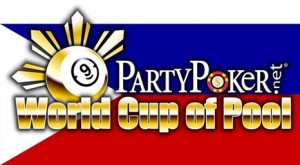 THE PARTYPOKER.NET WORLD CUP OF POOL will once again take place in Manila following last year’s hugely successful event in the Philippines. Taking place from Tuesday to Sunday 7th to 12th September, the event will feature 32 two-player teams shooting for a $250,000 prize fund.

Leading the way will be defending champions Efren Reyes and Francisco Bustamante, whose heroics last year lifted the nation as they beat Germany 11-9 in one of the most exciting finals in pool history.

That was the second time in the tournament’s four year run that the Filipino veterans have lifted the coveted trophy and with the host nation having the honour of fielding two teams in the event, they will be joined by recent World Pool Masters Champion Dennis Orcollo and Roberto ‘Superman’ Gomez as Team ‘B’.

Other top draws appearing in Manila are Marcus Chamat (Sweden), Niels Feijen of Holland, Malta’s Tony Drago and a host of big names to be announced.

The entire event will be broadcast by Solar Sports live across the Philippines with the live feed of the tournament available internationally. In addition Matchroom Sport will be producing a 31 x one hour highlights package of the event.

Commented Matchroom Sport Chairman Barry Hearn, “We are delighted to be returning to the Philippines after having enjoyed last year one of the greatest pool tournaments we have ever promoted.

“Solar Sports did a fantastic job bringing all the drama and excitement of the tournament to the screen and the large, enthusiastic crowds created an atmosphere unlike any I have ever seen at a pool tournament.

“The World Cup of Pool is fast becoming the biggest pool tournament in the world and we are delighted to see its continued growth in Asia and around the world.”