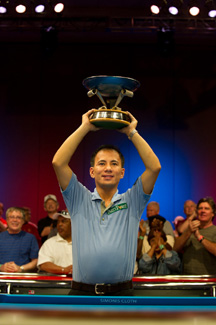 16th May He Beats ‘Unknown’ Kuribayashi for Title

OVER 750 players from around the world attempted to win the 2010 PartyPoker.net World Pool Masters but in the end after five days of play at the Riviera Hotel and Casino, Las Vegas, it was Dennis Orcollo of the Philippines who claimed the title and with it the $20,000 first prize

He beat the relatively unknown 25 year-old Japanese player Toru Kuribayashi 8-3 in front of an enthusiastic Las Vegas crowd to cement his position of one of the world’s top players. For Kuribayashi it was a week of superb performances and his name will now be known throughout the pool world.

“I’m very happy and you can see the tears in my eyes. If I could fly in the sky then I would fly. This tournament is really hard to win but I made it and I’m really proud to have won this. It’s my biggest win,” said a jubilant Orcollo.

“It was very difficult to play in the final as you try to not think that if you win this game then you are the champion. In the semi-final I wasn’t feeling like that but in the final I had to tell myself to just try and control my emotion.

“If you can’t stay in control of your emotions then you can’t do anything and your mind goes blank. So I just controlled myself and continued my game right until the end,” he added.

Orcollo came through the double elimination stage of the competition with an opening win over Shaun Wilkie, then a 9-8 defeat to Marcus Chamat and then victory against Jasmine Ouschan to reach the last 32.

There he avenged his defeat to Chamat with a 9-7 win before beating Raj Hundal 8-1 in the last 16. John Morra (Canada) was his quarter final victim before beating compatriot Roberto Gomez in the semi-final.

Kuribayashi got off to the worst start to the event, losing to Charlie Williams in his opening match, but made his way through to the last 32 stages with wins over Ahmad Taufiq and Tony Drago. There he beat Taiwan’s Kuo Po Cheng before whitewashing Daryl Peach in the last 16.

The quarter-final saw him take revenge over Charlie Williams before disposing of Oliver Ortmann in the last four.

Both players greeted the crowd as they were introduced to the arena and Orcollo looked set to take the first but left a green 6 ball wobbling which cost him the rack and Kuribayashi broke and ran the second to go into a 2-0 lead.

Orcollo had ball in hand in the third and converted it well to get on the scoreboard before he made an error in the next as he scratched, playing a safety and Kuribayashi made him pay to lead 3-1.

Kuribayashi looked in good shape in the next but lack of pace on the cue ball meant his run broke down. They exchanged safeties on the pink 4 before an attempted bank from Kuribayashi failed and Orcollo ran the rack to get to 2-3.

There was ball in hand opportunity in the next for Orcollo as Kuribayashi scratched making a jump shot and the Filipino converted his chance to level things at 3-3.

Kuribayashi left the 3 ball hanging over the pocket after an attempted safety and Orcollo dished up to take the lead for the first time and increased his lead to 5-3 in the next with a break and run.

Orcollo began to find his groove in the ninth game as he ran out his second consecutive rack to put some space between himself and Kuribayashi as the score went to 6-3. More great play from Orcollo put him on the hill at 7-3.

In fitting style, Orcollo ran out what was the final rack to win 8-3 and claim the title of 2010 PartyPoker.net World Pool Masters champion.

“I was worried when I missed the 6 ball (in the first rack) and it was unexpected but sometimes that can happen.

“After that I knew he (Kuribayashi) would be feeling confident because I had made a mistake but I was still hoping to get another chance and get back some momentum.

“The tournament is short races and if you lose one rack you could then be out. It’s a big difference to money games as if you lose a rack there then you have a chance of making a game again,” said Orcollo afterwards.

“In a money game it might not matter if you play badly at the beginning you can still recover but in a tournament if you start badly you may lose.

Earlier, Orcollo had beaten compatriot Roberto ‘Superman’ Gomez 8-6 to secure his berth in the final.  It was a high quality encounter and after 12 racks they were tied up at six apiece.

It was anyone’s but went in Orcollo’s favour as he edged the final two racks to make his second Matchroom Sport pool final, following his World Pool League victory in Poland in 2006.

In the other semi-final, Kuribayashi put on a display of shot-making and power breaking to beat Germany’s Oliver Ortmann. Playing fluently throughout, the young Japanese came with all the shots when required to seal an 8-3 win.

It was a great performance from Ortmann though in reaching the semi-finals and he is still a force to be reckoned with on a major stage.