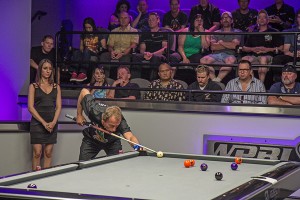 The World Professional Billiard League launched the inaugural 2013 season at the WPBL Arena in Las Vegas, NV last night to a packed house. The season’s first match-up featured the New York Pride against the Atlanta Scorpions.

The WPBL’s opening evening saw the New York Pride emerging victorious. In team play, the first two games were both ended in shoot-outs with each team earning one point for their respective victories.  In the next two team games, New York won in regulation earning two points for each win. In the season’s first single’s duel; hall of famers Johnny Archer and Earl Strickland had a battle which saw Archer coming from a deficit of 21-0 to end the game in a shoot-out, earning each player one point for their teams.  The next game featured Larry Nevel winning by the season’s first shut-out over Shannon Daulton, earing the Pride three points. Next, Warren Kiamco bested Dennis Hatch in regulation earning two points for the Pride. In the final game of the evening in team play, the New York Pride won in a shoot-out earning another point for a total of 12.  Finally, an additional three bonus points are awarded to the winning team for the match win, therefore the Pride ended the evening 15-2 over the Scorpions.

Technical difficulties interrupted the live stream when the server became overloaded with fans trying to view the match.  All issues have been rectified and tonight’s match will be broadcast as scheduled at 6pm PT.  As a show of gratitude to our fans for their support, we are offering the remainder of this weekend’s matches for free.  This evening’s match-up will feature Corey Deuel’s Miami Cruise taking on the Darren Appleton’s Philadelphia Aces. Those who have already paid for matches, will be credited to watch next weekend’s matches.

Additional match-ups this weekend will feature Phoenix vs. Minnesota, Los Angeles vs. Chicago, Houston vs. Pittsburgh and Las Vegas vs. Toronto. Each of the matches will be broadcast to a live studio audience at the WPBL Arena and at WPBLtv.com.  For a complete listing of this weekend’s schedule visit the WPBL website.  The WPBL will continue to make frequent announcements.  Please continue to follow the WPBL for additional updates: