Superbowl 9-Ball Open at The Rack in Memphis 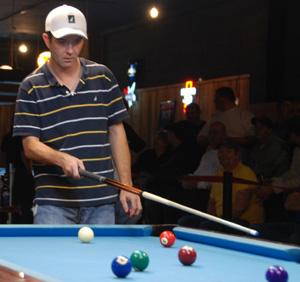 One hundred and seventeen players gathered in Memphis for the 27th year in a row for the Superbowl 9-ball Open at The Rack. This year’s tournament brought a few changes, with new tournament director, Jason Ling, of Tupelo, Ms. who brought a friendly, but to the point feel to the event.

In addition to these changes, The Rack also added streaming video coverage thanks to Josh Gilmore of Memphis who made sure that players who couldn’t make the event, or wanted to see how their friends or family members were playing, could watch from home. Matches played on 2 of the main event tables could be watched on the venue’s website – www.TheRackMemphis.com

Players arrived to The Rack to find 9 freshly covered Diamond 9′ Pro tables for the main event, along with 4 Diamond 7′ Pro-Am tables for mini-tournaments and 2 Valley 7′ tables for non-stop action. Local player Matt Martin kicked off the Calcutta around 8:30.

First Calcutta brought $7,840, paying 6 places. Once the tournament boiled down to 16 players, a second Calcutta was called, bringing $2,325 and paying 3 places. If the player did not purchase his/herself in the Calcutta, they were given the option to take half with the person who purchased them before the Matches started.

Play began Saturday morning at 10:00am. Players were given their play times Friday night. Matches were scheduled and kept pretty close to their times.

Skylar Woodward, (16) eliminated by local player Nick Vita, finishing 7th in this event, well worth mentioning. Congrats Skylar, we look forward to having you back. Keep an eye out for him, everyone!

Sam Gilmer, fighting a strong battle up the loser’s bracket after his first match with Hennessee, almost made it back to play him again, until matching up with a familiar face and winner of last year’s Superbowl 9-Ball Open, Jerry Slivka, who was put in the losers bracket by Hennessee also. Slivka takes the win against Sam at 7-5, only to match up with Hennessee again, who had just been sent to the losers bracket by Danny Smith, of Atlanta, Ga, who is now in the hot-seat.

Hennessee eliminates Slivka and after a brief breather, is ready for another long race against Danny Smith, only this time; he has to do it twice. And that is exactly what he did to win the Super Bowl XX1V 9-Ball Open. After all say and done there was over $17,000 payout during this event.

Jerry and Mona Ramey would like to give special thanks to the office staff, Chuck and Claude for the great food, Matt Martin for auctioneering the calcutta, Jason Ling for a smooth tournament, and most importantly, to the players for coming out and having a good time. We look forward to seeing you next year, or maybe sooner, for another great event.