The final is not double elimination but an extended race to 13. Shane looked to still be in great stroke taking the first 7 racks but Stevie mounted a comeback. But it was short lived winning only 2 racks making the score 7 to 2. Shane would take the 5 racks to go on the hill. But Stevie was not out winning the next 4 racks to make the score 12 to 6.  But Shane was not to be denied his third win at Super Billiards Expo taking the match 13 to 6.  Shane had previous wins in 2008 and 2010 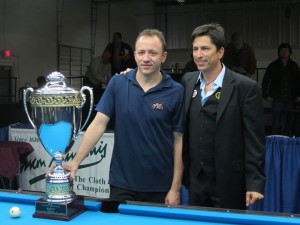