The sixteen winners still in contention for the Predator World Tour Spain event have earned free hotel and airfare for the next Predator World Tour event which is tentatively scheduled for Sao Paolo, Brazil in the summer of 2010. Eight countries will be represented in the final stage of the tournament that began in Lloret de Mar, Spain but the Americans out number them all. Six players will make the trip from the USA to the next event to fight for the title with players from Sweden, Germany, Netherlands, Portugal, Afghanistan, Mexico, Spain and the Philippines.

Still on the hunt for his second Predator World Tour title, David Alcaide had an impressive showing in his home country. After suffering a first round loss, Alcaide came back strong with several wins to secure his spot in the final sixteen. World Champion, Mika Immonen, dominated tournaments throughout 2009 but had a disappointing finish in his first event of 2010 as he was eliminated by Mexico’s Ernesto Dominguez and settled for 17th – 32nd.

The support from players was overwhelming and everyone in attendance was flexible in meeting the unforeseen challenges that were presented. “I would like to thank the organization because I think it has been very generous of them to propose this new prize for 16 players and give us a chance to complete the tournament in Brazil. I wasn’t planning on going to that event but now I’m excited that I get to play two events there,” noted Huidji See of the Netherlands who defeated France’s Stephan Cohen in the last elimination round. 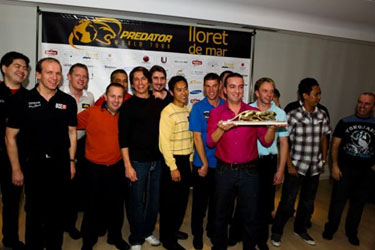