Cha’s the Champ in Galveston 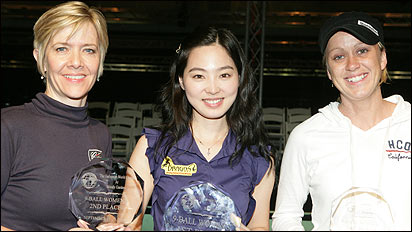 Korean phenom, Yu Ram Cha, certainly had her work cut out for her going into day 5 of the Women’s Pro 9-Ball Tournament at the Galveston World Classic, but would prove to be up for the challenge. Cha had suffered a loss in early rounds to Allison Fisher but would have her chance at revenge. After taking down the former European Champion, Line Kjorsvik, Cha would have to beat Fisher twice in this true double elimination tournament.
Fisher, Cha and Kjorsvik pose with their new-found hardware that they picked up at the Women’s Pro 9-Ball at the Galveston World Classic.

Fisher, Cha and Kjorsvik pose with their new-found hardware that they picked up at the Women’s Pro 9-Ball at the Galveston World Classic.

Taking an early lead at 4-0 in this race to 9, Cha seemed to be very much in control of the match. However, in the winner break format, you can never count Fisher out. Fisher finally got a good look at the table and closed Cha’s lead to 6-5. It would be all Cha from that point on as she went on to win 10 games in a row, closing out the first set 9-5 and running thru the beginning of the second set 6-0. It looked as if Cha would shut Fisher out in the second race, which was a race to 7, but she had an unfortunate scratch on the 9ball to give Fisher her only game in that set. Yu Ram Cha won her first major title in the U.S. and pocketed $6,000 for her efforts this week as Fisher would take home $3,000 for second.