THERE’S A NEW KID IN TOWN 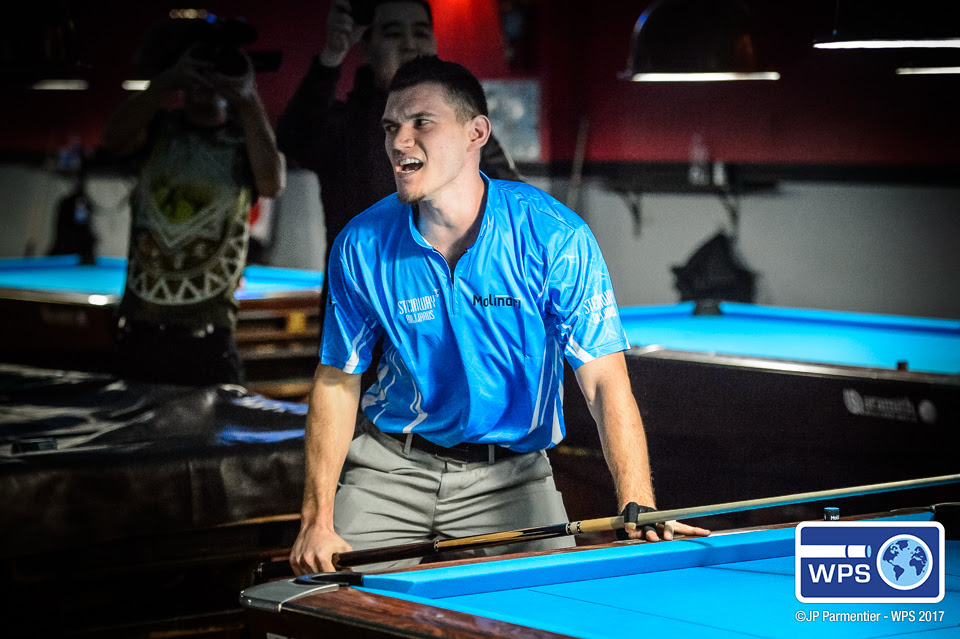 American Billy Thorpe erupts in joy after winning a round of 32 shootout against Alex Pagulayan.

(New York City)-For several years up through 2015, Billy Thorpe made a name for himself on the American pool scene as a dashing young talent with a hot stroke who dared to play-and win- ridiculously high stakes money games. Then in 2016 the then 19 year old decided he wanted to transition into being a real pro, and for the last year he has slugged it out with the big boys in tournaments big and small, attracting attention from pool fans eagerly looking for the next great American player.

Thorpe did create some noise in 2016, but history will surely show that it was in New York City  on a cold Sunday in January, 2017, when the brash Dayton, Ohio native truly arrived as a professional, and stamped his mark as possibly that next great American pool player.

Playing with a panache and heart that belied his years, the now 20 year old Thorpe created one of the biggest stories of the first 8-ball event of the four-tournament World Pool Series, by taking down two world champions and barging into the final 16 of the Molinari Players Championship.

In a round of 64 TV table match, Thorpe played marvelously in defeating heavily favored three-time world English 8-ball champion Mick Hill, 13-11. Then, in the final 32, Thorpe roared back from an 11-8 deficit to tie former World 9-ball Champion Alex Pagulayan, 12-12. The young American then dramatically won the match by sinking all five shots in the thrilling shootout to advance to the final 16 on Monday.

Within moments Thorpe, who has been playing pool since he was three years old when his dad would let him walk on top of the family pool table and slap balls, had become nothing short of mini-sensation inside the packed Steinway Billiards in Queens, accepting congratulations from fans and posing for photos. The good looking and infectiously excitable American had become an instant hit, and he relished every moment of it.

“These wins tonight really opened my eyes a little bit for me,” Thorpe said. “I’ve worked hard. I’m always at tournaments and I’m always playing. I knew I could hang with these guys but I was always making too many mistakes and that would cost me against these players. So I’m trying to minimize my mistakes and take advantage if they make a mistake.

“I’m playing by far the best pool of my life. I’m really happy with my game. I’m grinding every shot, trying to keep nerves down, taking it ball by ball, playing my heart out like I always do.

“It means a lot. Hopefully I’m going to be on their level one day, be a world champion myself. I love that pressure. I love that adrenalin. I love being out there playing with these guys.” 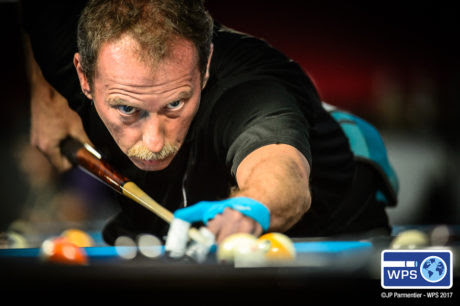 Thorpe’s feats were just one part of brilliant and long day of hardcore 8-ball at the highest levels on Sunday as the Molinari Players Championship moved into the money rounds. The day began at 10am with 64 players and ended past midnight with just 16 players remaining. These 16 represent the full spectrum of some of pool’s great talents, from legends and world champions, to up-and-comers like Thorpe, and from nearly all corners of the globe. On Monday all matches will become a bit longer and turn to winner breaks, and will see the field cut to four. The champion will be crowned on Tuesday evening.

The Philippines is not normally known as an 8-ball playing country. But the Filipinos love of 15 ball rotation seems to serve them well in a heavy traffic game like 8-ball and the four Pinoys remaining in the event have looked exceptionally strong.  Former World 8-ball Champion Dennis Orcollo breezed into the final 16 with two easy wins today and his positive demeanor bodes well for the veteran. After coming back to defeat American Frankie Hernandez, Lee Vann Corteza headed to the TV table where he turned on the gas and defeated talented Greek Nikos Ekonomopoulos.  The exciting and good looking Johann Chua looked unflappable with two wins. Carlo Biado also played rock solid today, and his round of 32 win against very tough Englishman Mark Gray proved that the young Filipino has the goods to go all the way. 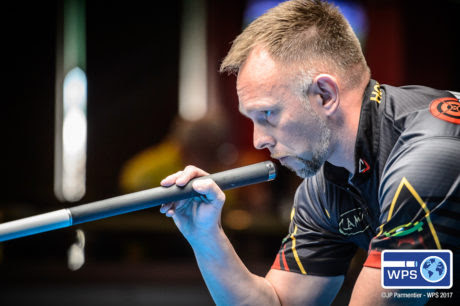 Multi-world champion Thorsten Hohmann of Germany won two matches on Sunday to secure his spot in the final 16.

Melling hasn’t played American pool in two years after quitting the game and selling his cue to join the World Snooker tour where he achieved a ranking of 76. But when his good friend Appleton asked him to play on his new 8-ball tour, Melling answered the call and came to New York.

Playing with a mix and match cue, the super talented Melling engaged in a brilliant match with Spain’s David Alcaide in the round of 32. The pair slugged it out in a highly entertaining affair with Melling coming back to squeak past the Spaniard, 13-11.

When he’s on, Melling can be positively electrifying on the table, taking daring shots that no other player would even think of. He claims he’s playing without confidence, but those who watched him play on Sunday certainly saw flashes of his brilliance that could surely carry the Englishman to the winner’s circle.

“Because I’ve been out of the game for two or three years,” Melling said, “I think it’s important to play the really good players. I’m not frightened of anybody. I don’t care about reputations because I know what I can do on the table. If I concentrate on my own game, it doesn’t matter what anyone else does because I’m in control of my game. When you let other people get in your head, that’s when you lose. So I’ve got to take each game as it comes.

“I actually feel like I’m playing bad. In my head I think I’m going to miss every shot I’m playing. And that’s just a lack of confidence because I haven’t been playing. Normally I’m probably the most confident guy in pool and that’s because at one point I was winning everything. But then when you lose a few matches and things don’t go your way, you start questioning your ability, your cue action, am I jumping up on the shot. You don’t know what you’re doing. It’s just nice to win even when you don’t feel good.” 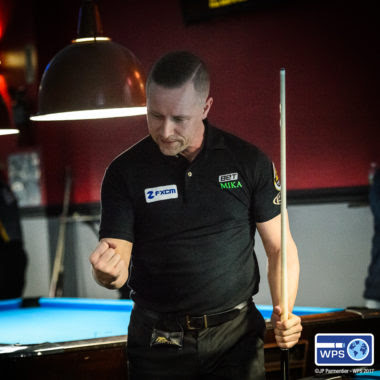 Finnish Hall of Famer Mika Immonen came from behind then won a dramatic shootout against Filipino veteran Ramil Gallego to advance to the last 16.

Some more names in the final 16 represent a who’s who of pool heavyweights from the past generation. Germany’s  two legends,Thorsten Hohmann and Ralf Souquet, made it through. So too did the USA’s Hall of Famer Earl Strickland. Another Hall of Famer, Mika Immonen had to come from back from a deep deficit to tie Filipino veteran Ramil Gallego, then promptly won the dramatic shootout to secure his place in the final 16.

The semi-finals and finals will take place on Tuesday.

The winner of the Molinari Player’s Championship will receive $20,000.