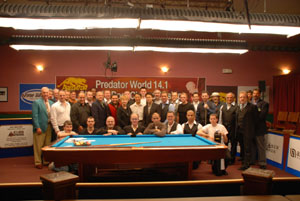 The players of the 69th World Straight Pool Tournament- photo courtesy Tom Flowers
Parsippany, New Jersey- Day 1 is in the books of the 69th World 14.1 Championship. Of course the favorites, the Europeans, made it through relatively easy, such as Hohmann’s 92 and out against Jonathan Smith,Ortmann’s dominating play over Steve Lipsky, and France’s Stefan Cohen’s 91 and out against Earl Herring. But the USA is looking good and so are the ladies,as they made their niches, too. The Predator World Straight Pool Championship is presented by Ozone Billiards. The Dragon Promotions revived event is in its 4th consecutive year alive with help of industry giants such as Predator, Ozone Billiards, Brunswick Billiards, Simonis Cloth, Master Chalk, Aramith Balls, Accu-Stats and the Laser Rack. Comet Billiards will host this year’s event which will start play on August 24, 2009 and end August 29. The greatest straight pool players from around the world will arrive on USA’s east coast again to New Jersey, and attend this prestigious event to play for the coveted title of World Straight Pool Champion.

Johnny Archer escaped underdog Ed Deska after trailing 82-50, but came back and ran the set out after a great jacked up cross side bank. Forum fan favorite Max Eberle returns to the World Tournament after 2 years absence with his dominating 100-28 win over California’s Dan Wallace. Notable absence from John Schmidt who broke his arm a few weeks before the event. Schmidt would’ve been USA’s top hope to win the crown, but players such as Archer, Eberle, Robles, Hopkins, Barouty are more than capable.

In an entertaining match on Accu-Stats, legendary Grady Mathews took on Danny Barouty, local NY legend. In a long winded match full of safeties, three fouled, and scratches, Barouty came on top at the very end 100-73.

“I just read the comments from the European contingent. Don’t be surprised if the winner doesn’t celebrate in a beer hall over a tall stein. There are going to be a few surprises coming out of the Big Apple. A victory drink at Greys Papaya on 72nd is a definite possibility. The owner of Amsterdam Billiards should start getting the joint ready for the celebration following the return of the title to the greatest city in the world. Not Berlin or Helsinki but New York. (Apologies to Madrid, Paris, Seoul and Tel Aviv. It ain’t happenin’).  I guarantee victory or my name isn’t Steve Lipsky.” said the always entertaining Danny Barouty of NY.

Per day tickets can be bought at the door during the event.

The Mosconi High Run Award will pay $500 to the players with overall high run of the event plus $100 to the highest run each day.

The high run prizes are sponsored by Jay Helfert of Los Angeles CA, and Louis Pannullo of Queens, NY.

Accu-Stats Live Stream TV Schedule for Tuesday Day 2 will be:

August 28 at 5pm, the night before the finals, Comet Billiards will host a special sponsor / pro team match tournament for the patron sponsors of the event. Billiard aficionado Stu Mattana of NYC and long time billiard supporter Harold Siegel of NYC are two of this year’s generous patrons of the Predator World 14.1 Championship. Their contributions are helping keeping the event going. Dragon Promotions encourages others to come on board to join as a sponsor and can be reached at worldstraightpoolchampionships@gmail.com or call 1-407-782-4978