Corey Deuel has made a successful transformation to snooker as the former U.S. Open 9-Ball Pool Champion has now added the 2013 United States National Snooker Championship title to his collection with victory at Snooker 147 Bar & Grill in Houston, Texas.

It has been an incredible event for the 35-year-old from Florida as he was fortunate to qualify from the group phase after suffering two defeats out of four matches, placing runner-up to the five-time champion Tom Kollins, but he slowly forged his way into the Championship and gathered momentum with each match played to reach the final against the defending champion, Sargon Isaac.

The 27-year-old from California was in good form throughout the championship, and looked formidable in his semifinal victory which would have made him favorite to retain his title. 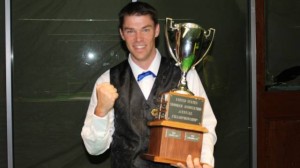 Deuel is an impressive performer however, as he calmly approached each attempted pot and methodically thought over many of the safety exchanges.

Number one seed Isaac made a very underwhelming start to the final as he found it difficult to take advantage of any chances, and Deuel’s commanding presence helped him win the first two frames comfortably.

Isaac is though the more accomplished break-builder of the two, and when he hit a very fluent and precise run of 68 to win the third frame it appeared the tide had turned in his favor as he started frame four in a very confident manner.

This upbeat mood for Isaac though did not last long as he offered an opportunity to Deuel to get back into the frame, and he duly took it and won it assisted by a break of 53 to lead 3-1 into the mid-session interval.

The interval did not help to settle Isaac, as on the resumption he still found it difficult to play himself into the tie. 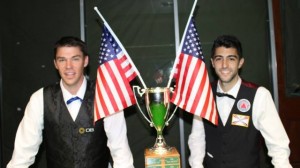 Deuel completely dominated proceedings from then on as a contribution of a break of 36 helped him seal frame five, and runs of 34 and 39 in the following frame helped him wrap up the match 5-1 for a terrific victory.

All credit must go to Deuel as what he lacked in snooker knowledge was made up by using his years of experience of playing professional pool at the highest level, and he must be applauded for making the positive decision to broaden his billiard playing horizons and take up the challenge of competing in the National Snooker Championship.

Isaac however will be incredibly disappointed with the way he competed in the final, as this is the first time he has tasted defeat in this Championship and brings to an end a thirteen-match winning run. He will reflect on what he will be the first to admit was a very below par performance, which allowed Deuel to dominate him in the final. This loss though will make him even more determined to claim that second title next year.

Both players have now gained automatic selection to represent the United States in the Men’s Event of this year’s International Billiards & Snooker Federation (IBSF) World Snooker Championships, which will take place in Riga, the capital of Latvia, from November 18-30. The winner of this Championship will be invited to compete on the multimillion dollar professional 2014-15 World Snooker Tour.

The United States Snooker Association (USSA) would like to give its thanks to everyone who made this Championship possible, especially to the players who came from all across the country, and to the hosts, Mr. Mani Hassan and Mr. Aurangzeb Mahmud, the proprietors of Snooker 147 Bar & Grill, for their enthusiasm for the sport and for providing the highest quality facilities to play the Championship on.