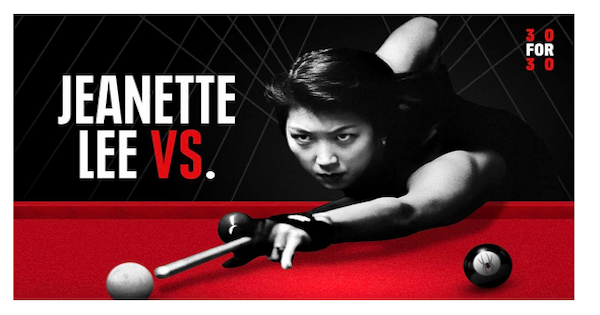 ESPN will debut the next installment in the Peabody and Emmy award-winning 30 for 30 series, “Jeanette Lee Vs.” on December 13 at 8 p.m. ET on ESPN. Directed by Ursula Liang (“9-Man,” “Down a Dark Stairwell”), the documentary recounts the rise of Jeanette Lee, the billiards player nicknamed “The Black Widow,” who at her peak became, improbably, one of the most recognizable figures in sports. The film will be made available on ESPN+ immediately after its premiere, along with the rest of the30 for 30 library.
She was like nothing else her sport had seen. A vision of confidence, even swagger, as she stalked the billiards table. Dressed, always, in her signature color, with a two-fingered glove on her bridge hand and a stony, icy glaze that never seemed to change. The 30 for 30 film returns with Lee to her origins, Brooklyn, New York, where as the young child of Korean immigrants, she suffered from scoliosis, a painful spinal condition that required surgery. Lee rebelled as a teenager, and fell in love with billiards one night when she walked into a pool hall in Manhattan. Within a few years, she was playing tournaments and headed towards the professional circuit. Soon, women’s billiards was a mainstay on the fledgling ESPN2 network, and Lee’s unapologetic approach to self-promotion made her a television star.
Even as Lee became one of the top-ranked pool players in the world, her back issues never entirely went away. Then in 2021 came something more frightening: a diagnosis of ovarian cancer. As the film illustrates through extensive access to her life today, it’s a struggle she continues to fight, now as a single mom with the support of her children and extended family. It’s a poignant coda to a story about a woman who’s been battling her whole life and who remains one of the more distinctive stars to ever emerge on the sports landscape.
Said Liang: “This is a challenging moment in the U.S. for Asian Americans; the community is on edge and increasingly targeted in bias incidents. There couldn’t be a better time to bring Jeanette’s pioneering, maverick journey to the forefront. She is inspiring at every turn and an icon to many. I’m honored to tell her story and introduce her to new audiences. She battled fierce opponents, trying times, debilitating pain, personal demons and persistent criticism, but remains a singular presence from a breakout era of pool—an unforgettable figure, the Black Widow.”
The documentary is executive produced by ESPN Films in association with Words + Pictures, founded in early 2021 by Connor Schell. From Words + Pictures, Schell and Libby Geist are executive producing. This is the second collaboration between ESPN Films and Words + Pictures as part of an ongoing deal between the two companies. Phil de Picciotto, Jason Weichelt and Tom George are also serving as executive producers.
Advance press screeners, additional information, including film clips and director statements and bios, are available upon request. Follow 30 for 30 on Facebook, Twitter and Instagram.

About ESPN Films
ESPN Films has been an industry leader in documentary filmmaking since its inception in March 2008, producing more than 100 documentaries that have showcased some of the most compelling stories in sports. The high quality of storytelling, highlighted by the Peabody and Emmy Award-winning 30 for 30 series and the Academy-Award winning documentary “O.J.: Made in America,” has led to record viewership as well as multiple honors and critical acclaim. Additional projects from ESPN Films over the years have included 30 for 30 Shorts, Nine for IX, SEC Storied and Emmy award-winning docu-series “The Last Dance.” ESPN+ is the exclusive home for the entire 30 for 30 library.
Media Contacts:
Jay Jay Nesheim: jayjay.nesheim@espn.com
Isabelle Lopez: isabelle.m.lopez@espn.com