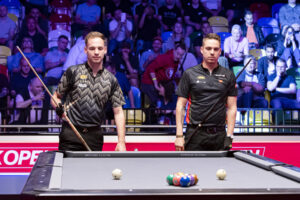 Joshua Filler has won the inaugural 2022 UK Open Pool Championship at the Copper Box Arena, London beating Francisco Sanchez Ruiz in the final 13-7 live on Sky Sports in the UK, Matchroom Pool Facebook in the USA, Canada, Spain, and Italy, Viaplay in Scandinavia, and the Baltics, as well as Matchroom.Live in selected territories.

Filler won the lag and won the opening rack in a sign of early nerves from Sanchez Ruiz. Sanchez Ruiz was left with a tricky jump over the eight to make the two, he proceeded to foul on the eight, and soon it was 1-0 to Filler. Routine break and runs in the second and third gave Filler a quick 3-0 lead inside 15 minutes. Filler was on the hunt for his second title in as many weeks in the Nineball arena, but he let Sanchez Ruiz back in in the fourth after narrowly missing the middle pocket when jumping to make the seven. El Ferrari rallied from there to win the resulting three racks to level at 3-3.

At 3-3, Filler had an opportunity at the table again on the one but couldn’t do much with an attempted cut. Sanchez Ruiz ran out from there with an exquisite bank on the five ball the pick of the lot as he led for the first time at 4-3. A formulaic break and run in the eighth put El Ferrari ahead by two.

As much as both love the exhibition shot, the game was often deep-rooted in technical safety battles. The pick of it in the ninth as both Filler and Sanchez Ruiz hid the cue ball on multiple occasions away from the two. Sanchez Ruiz blinked first though after Filler played an expert safety that forced to kick the two only for it to meander down towards the bottom pocket and in ample range for Filler to clean up and cut the deficit to one at 5-4.

Filler played smart in the tenth rack to get the better of Sanchez Ruiz despite being hooked on the break. A pinpoint safety of his own left Sanchez Ruiz with work to do which inevitably opened up the table for the German to settle it and go level again at 5-5.

With the break back, Filler scratched in the 11th off it to put Sanchez Ruiz at the table. Sanchez Ruiz has played more matches than any other player this week and the tiredness wasn’t showing through just yet despite the eight-ball rattling in the jaw to the point Filler was ready to get back up to the table. FSR led again at 6-5. Sanchez Ruiz soon built a two rack buffer and it seemed he could go on to run a few after the five pack that led him on his way to beating Shane Van Boening in the semi-finals.

Sanchez Ruiz was left looking for a lot of ships to align for him to make a two ball along the rail in the following rack at 7-5 and it just didn’t happen. Filler did open the door again for Sanchez Ruiz though after missing the five ball, though that did not happen for the Spaniard as his counterpart got the better of him to be one back. A break and run in the 14th levelled it again at 7-7.

Filler hadn’t led the contest since 3-2 but he took hold of it in the following rack to lead 8-7. The Killer fluked the two ball to set him on his way after his jump shot went wrong, the two hit the bottom of the table before kissing the six ball to wriggle its way in the middle pocket to help him on his way. It was a vintage run out for Filler in the 16th as he asserted a two rack buffer again.

The World Pool Masters champion has a mentality that very few have, and he was well on his way to another major title on his CV as he ran another rack to lead 10-7 with his sixth in a row. Just three away from victory, Filler soon made it two without even blinking. As soon as Filler was on the hill, the inevitable happened as he finished his job in supreme style to clinch the title 13-7 with five racks in a row.

Filler said: “I’m not having a too bad of a month. It means the world to me. It was an incredible tournament to me. I was struggling at times. Fran played an awesome tournament. I said before the semis, you deserved to win them. The way you played the final from 7-5, I was waiting to see how I could win this final. The luck went on my side eventually. Fran is one of the best players.”

“It’s the pressure you have as a player. When you come here you just want to win the tournament. Every match is just so tough with so many great players. We’ve seen Fran lose the first match then come here. It’s the pressure.  Look at the arena, it is just wonderful.”