Pagulayan, Sullivan, Janscos Elected to Billiard Congress of America Hall of Fame Superior, Colo., July, 16, 2019 – The Billiard Congress of America Hall of Fame will welcome a lion, an innovator and a pair of pioneering brothers to the class of 2019. The United States Billiard Media Association today announced that Filipino-Canadian Alex “The Lion” Pagulayan, table manufacturer and promoter Greg Sullivan and Johnston City Hustlers Jamboree promoters George and Paulie Jansco have earned induction into the sport’s most prestigious club. 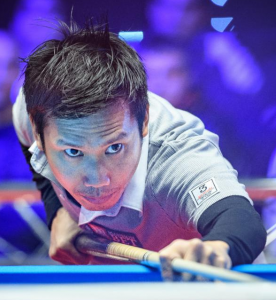 Pagulayan, 41, earned election in a run-off against England’s Kelly Fisher, after the two had tied on the initial ballot. He will enter the Greatest Players wing of the BCA Hall of Fame, while Sullivan, 70, and the late Jansco brothers will be honored in the Meritorious Service category. All will be formally inducted during ceremonies on Friday, Nov. 1, at the Norfolk Sheraton Waterside in Norfolk, Va.
Born in the Philippines but raised in Toronto, Pagulayan is one of the game’s most expressive and entertaining players. But his reputation as a comic cut-up is second to his reputation as one of the game’s best all-around players. Pagulayan burst onto the scene as a 24-year-old in 2002 when he advanced to the title match of the U.S. Open 9-Ball Championships, where he lost to Germany’s Ralf Souquet, 13-11. A year later, the impish Pagulayan, who is also known as “The Killer Pixie,” reached the final of the World Pool Championship, losing this time to Germany’s Thorsten Hohmann. In 2004, a 26-year-old Pagulayan broke through, winning the World Pool Championship in Taipei, defeating Taiwan’s Pei-Wei Chang, 17-13, for the title. In 2005, Pagulayan returned to the U.S. Open 9-Ball Championships title match, this time claiming the crown. He has gone on win numerous major pro titles, including the World Summit of Pool, the World Pool Masters and is the only player to have won titles in all three main divisions of the annual Derby City Classic – One-Pocket, 9-Ball and Banks. He becomes the fourth Philippines-born player to be inducted into the BCA Hall of Fame.
“I don’t know what to say,” Pagulayan said after being informed of his election. “For a pool player, this is the ultimate accomplishment. And I’m happy to become the first Canadian in the BCA Hall of Fame.
“Being in the Hall of Fame never crossed my mind as a player until I started going to the annual banquet,” he added. “I started to wonder if my accomplishments were enough. Now, in some ways, this makes me feel old!” 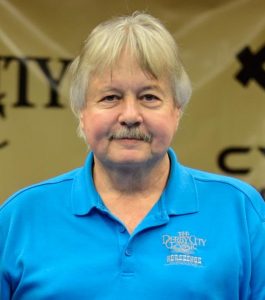 Sullivan has made a lasting impact on pool as both an innovator and a promoter. The Indiana native is known as a friend to the players and as a man consumed with elevating pool to true sport status. As a poolroom owner, Sullivan used input from top players to help construct top-level tournament tables, thus launching Diamond Billiard Products. Sullivan is credited with introducing optical sensors to coin-operated tables so that standard cue balls could be used, putting professional-level equipment into the hands of casual and aspiring players. In the 1990s, Sullivan contracted the Pantone company to research the optimum color for pool cloth, resulting in the Tournament Blue prevalent in professional tournaments. As a lifelong fan of the Johnston City Hustler’s Jamborees of the 1960s and ’70s, Sullivan launched a similar multi-discipline event, the Derby City Classic, in 1998. The annual event has drawn thousands of professional and regional players to Southern Indiana for 21 years.
“I have to say, I’m in shock,” Sullivan said when informed. “My whole life has been about pool, just trying to turn it from a game to a sport. It’s all I’ve ever done.” 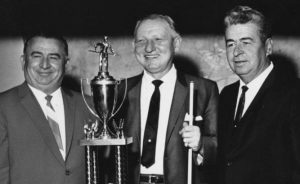 That George and Paulie Jansco should join Sullivan in the same Hall of Fame class is appropriate, since the Southern Illinois club owners founded the famed Johnston City Hustlers Jamboree and All-Around Pool Championship in the 1960s. The Janscos contributed to the pool’s romanticized image as a gunslinger’s activity. Their promotion of the gambling aspect of the sport contributed to its rise in popularity with the public, with their tournaments drawing media coverage from major television networks and national magazines like “Sports Illustrated.” So popular were the Johnston City events that the Jansco’s launched a second event, the Stardust Open in Las Vegas. The Janscos could also be credited with moving 9-ball and one-pocket into the game’s forefront during a time in which straight pool was considered the only professional game. They were also among the first promoters to welcome integrated fields, paving the way for players like African-American Cicero Murphy to compete for world titles. George Jansco passed away in 1969. Paul Jansco died in 1997.