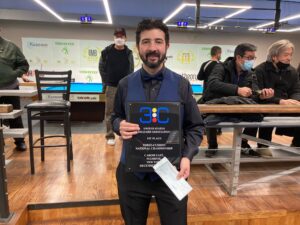 Banished from the USBA nationals for the last two years because of a UMB suspension for agreeing to play in the PBA, Pedro Piedrabuena from San Diego took out his revenge on the field of US championship aspirants two months after his suspension was lifted. When the chalk dust had settled, he had secured his 10th national championship trophy.

Over the four days of play, Piedrabuena posted a 10-1 record, his only hiccup being a 25-14 loss to Kang Lee of New York in group play. In the knock-out phase, the southern California cue wizard bested local player Sang Jin Lee 40 to 9 in 14 innings (2.857) and three-time champion Miguel Torres 40 to 14 in 15 (2.667). In the semi-finals, the play was slower and more conservative, with Piedrabuena defeating Edward Gomez 40 to 17 in 36 (1.111). Catching a second wind, Piedrabuena put on a dazzling display of shots and position play in a decisive victory over Tae Kyu Lee, the 2020 National Champion. The game was tight at 25-24 in 10 innings, but Lee’s hope at defending his crown ended when his opponent calmly ran 11 and 4 in consecutive innings. The San Diegan closed out the game in 15 innings (2.667 to 1.667). 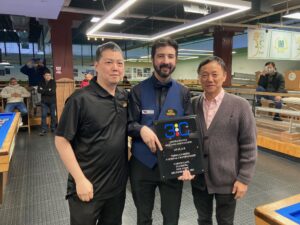 Tae Kyu Lee’s route to the finals was rockier. He advanced from group play with a 4 and 3 record, finishing third behind John Park of Houston and Jong Min Lee from New Jersey. His grand average was but 0.798, much below his usual standard. His struggles with the tables continued in the round of 16 with a 40 to 21 victory in 40 innings (1.000) over Hernan Patarroyo of Miami and in the quarter finals with a 40 to 18 victory over Eric Kwon of New York in 42 innings (0.952). For his semi-final opponent, Tae Kyu Lee faced his younger brother, Young Kyu Lee. The elder sibling survived the defensive struggle, 40 to 37 in 44 innings (0.909). The defending title holder finally found his form in the finals. Not willing to let his crown be taken without a fight, the New York matched Piedrabuena for 10 innings but ultimately could not keep up the pace of billiards.

Per the USBA protocols, the top 8 players qualified for the World Cup in Las Vegas in March 2022. 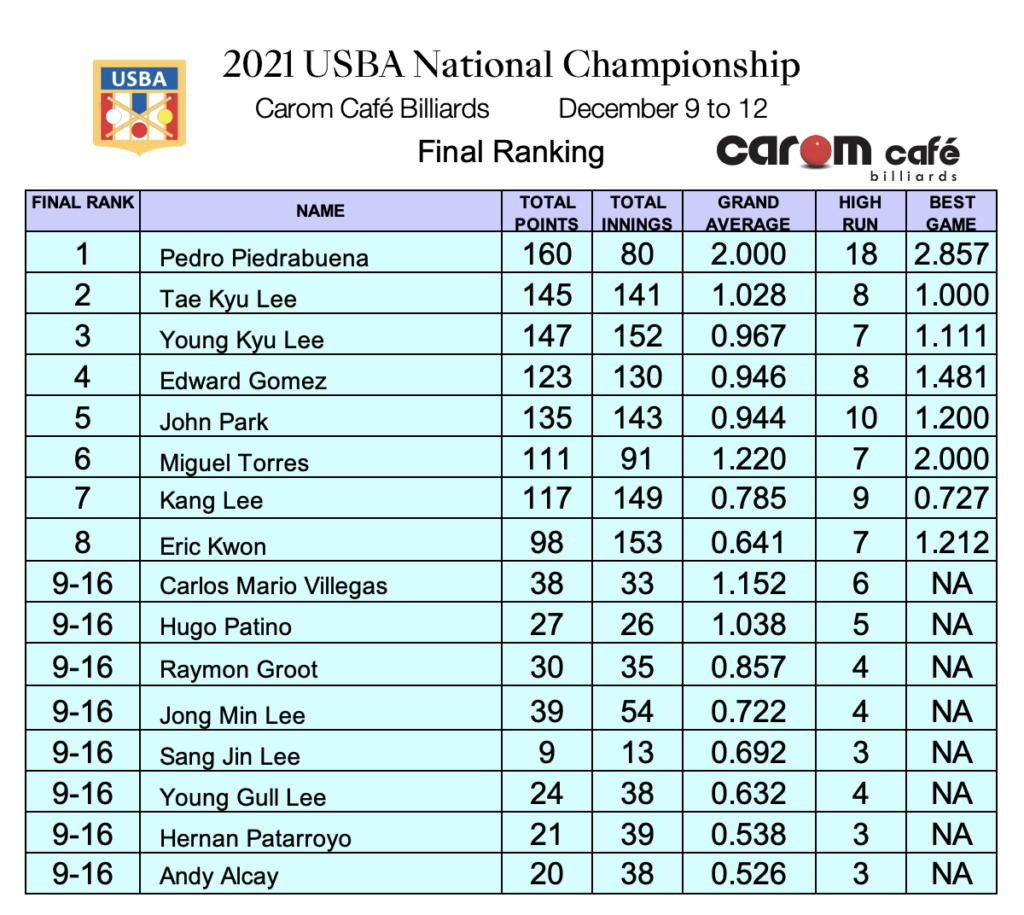 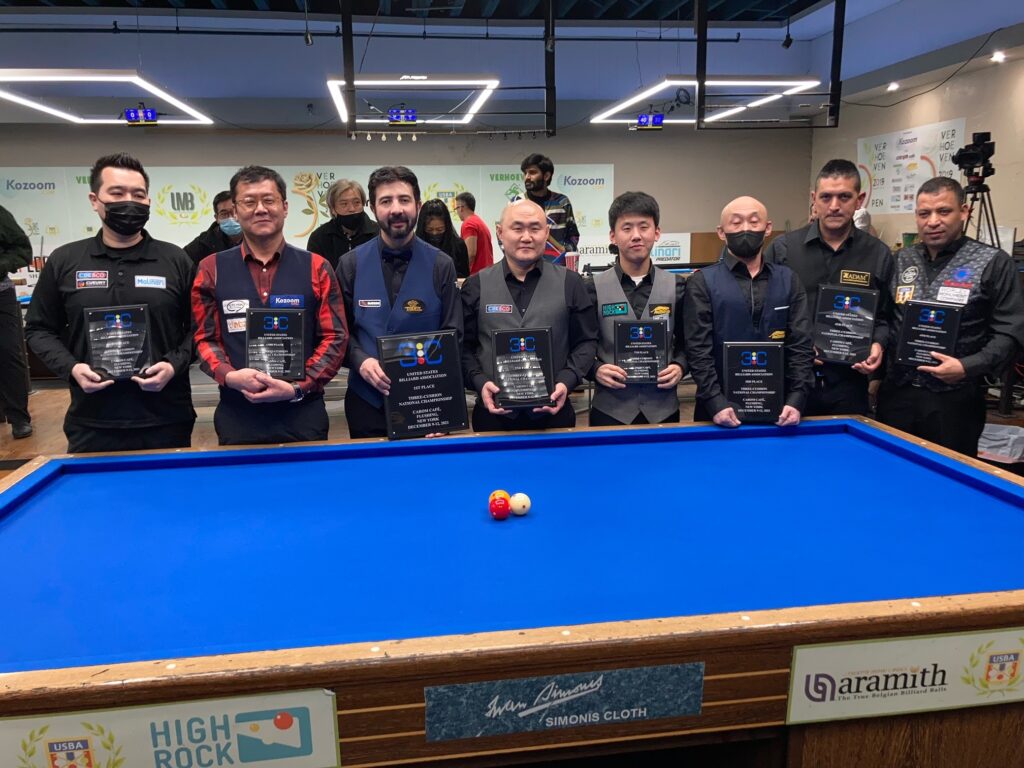 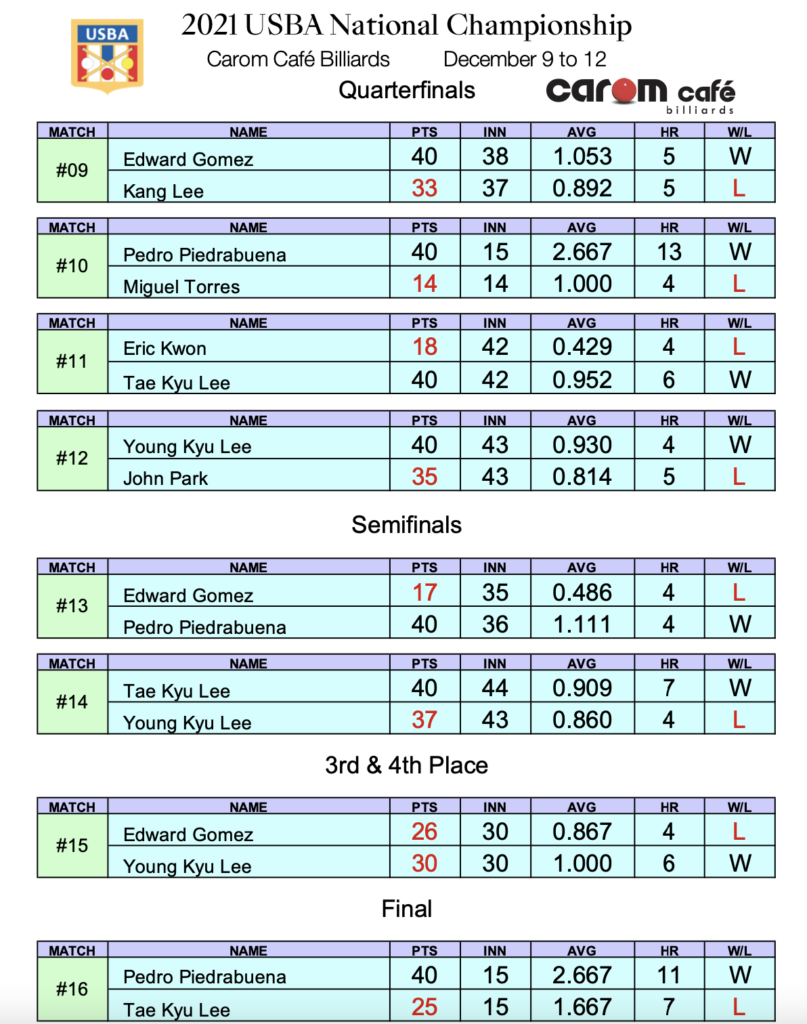 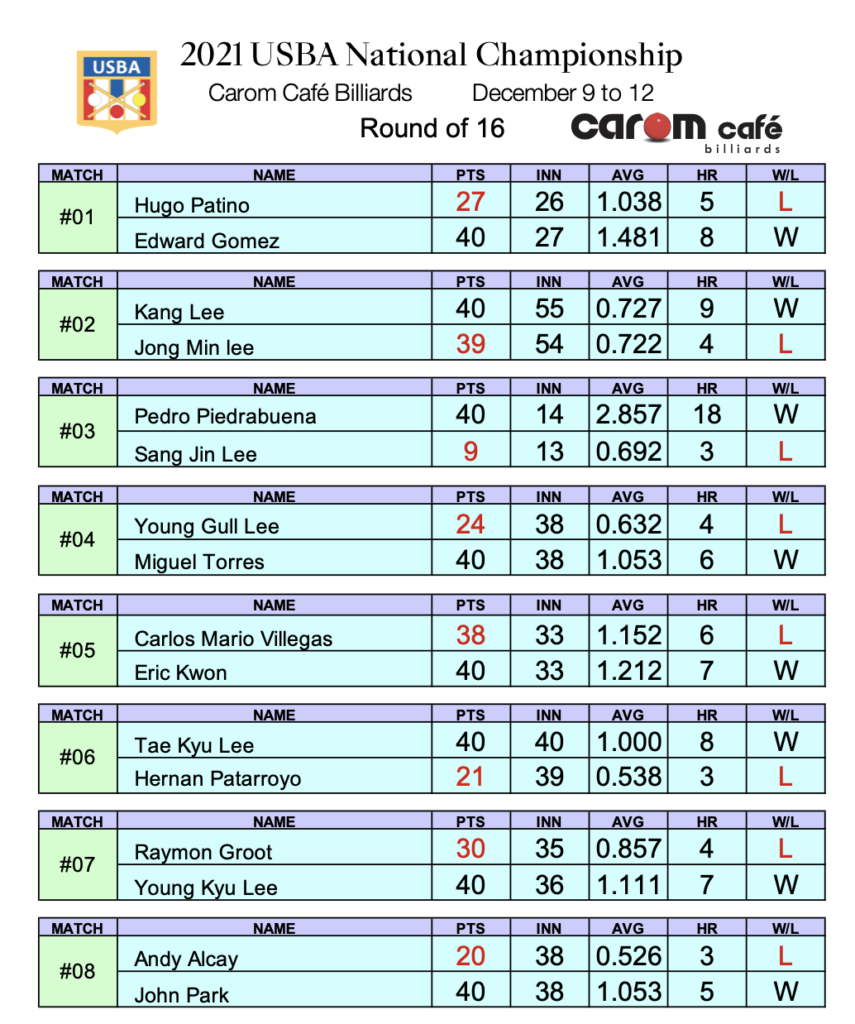 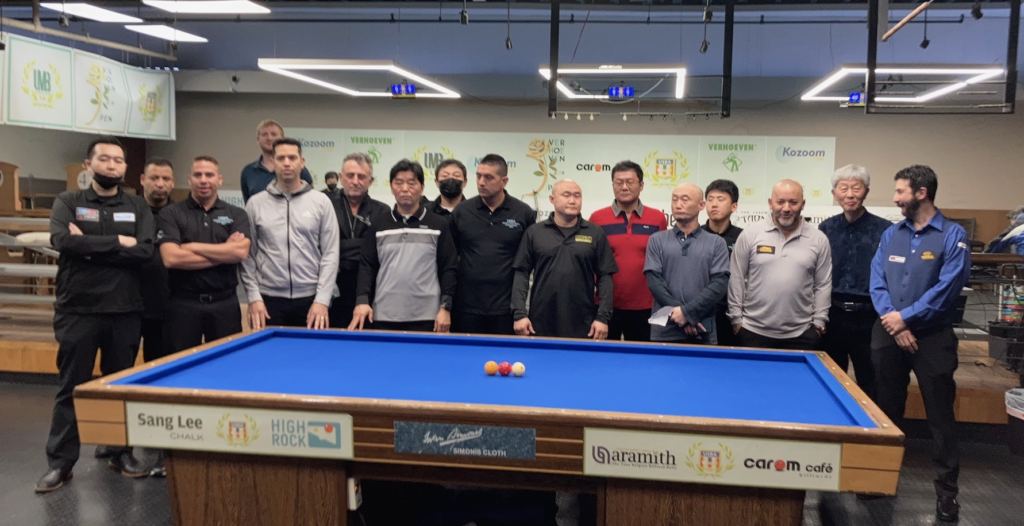 See the Prelims Charts Rankings below 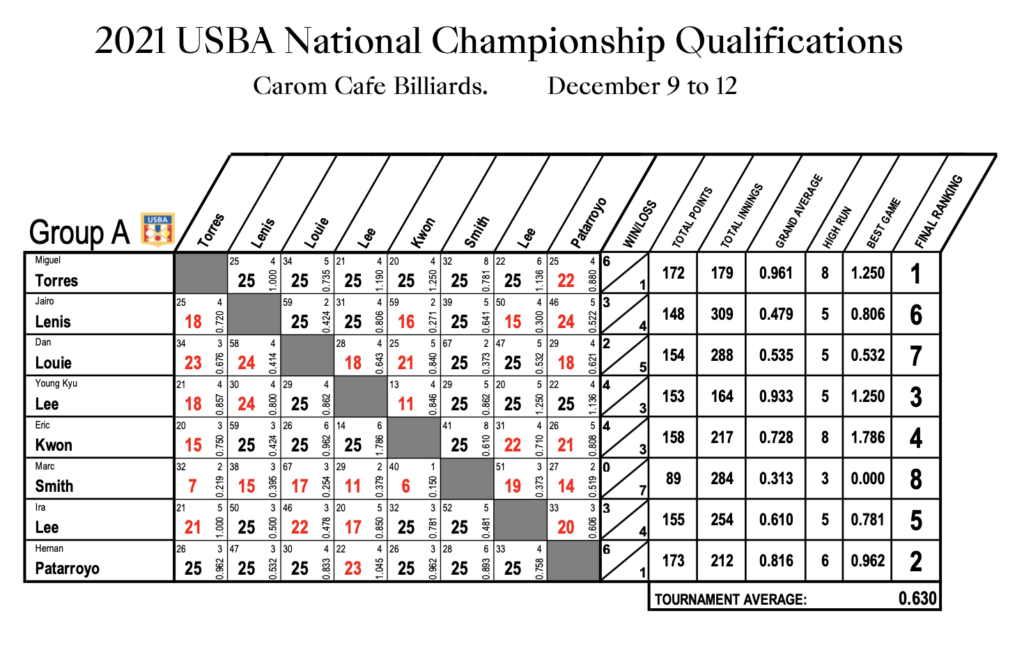 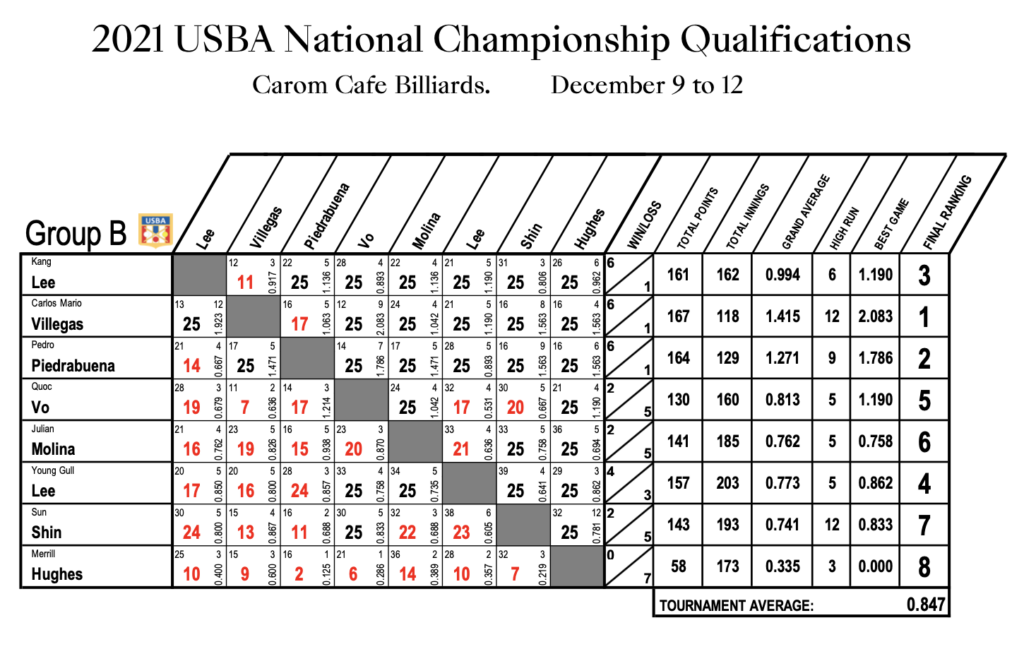 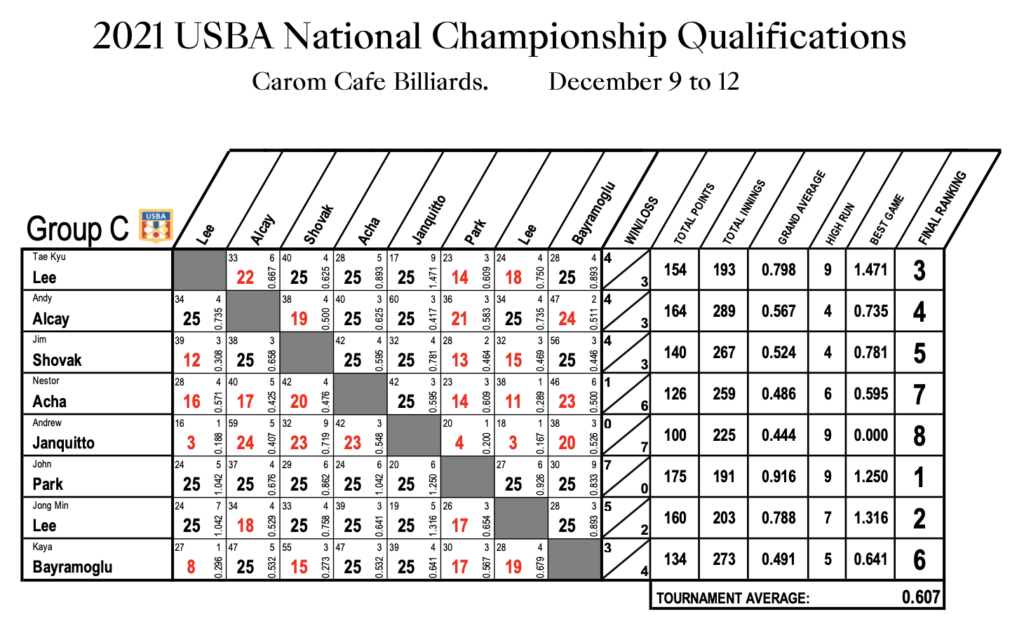 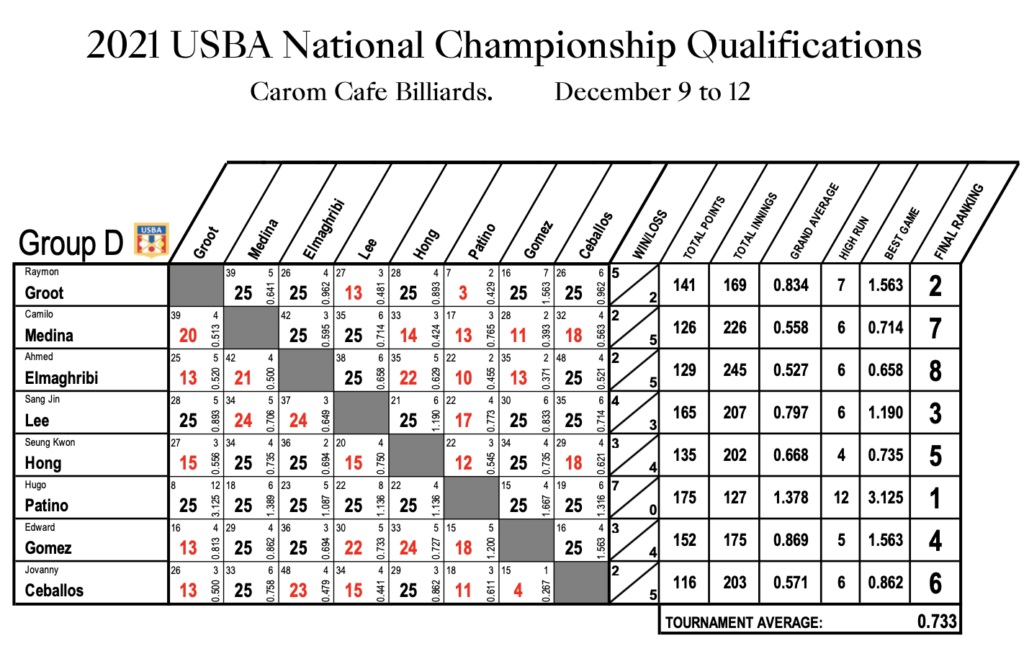 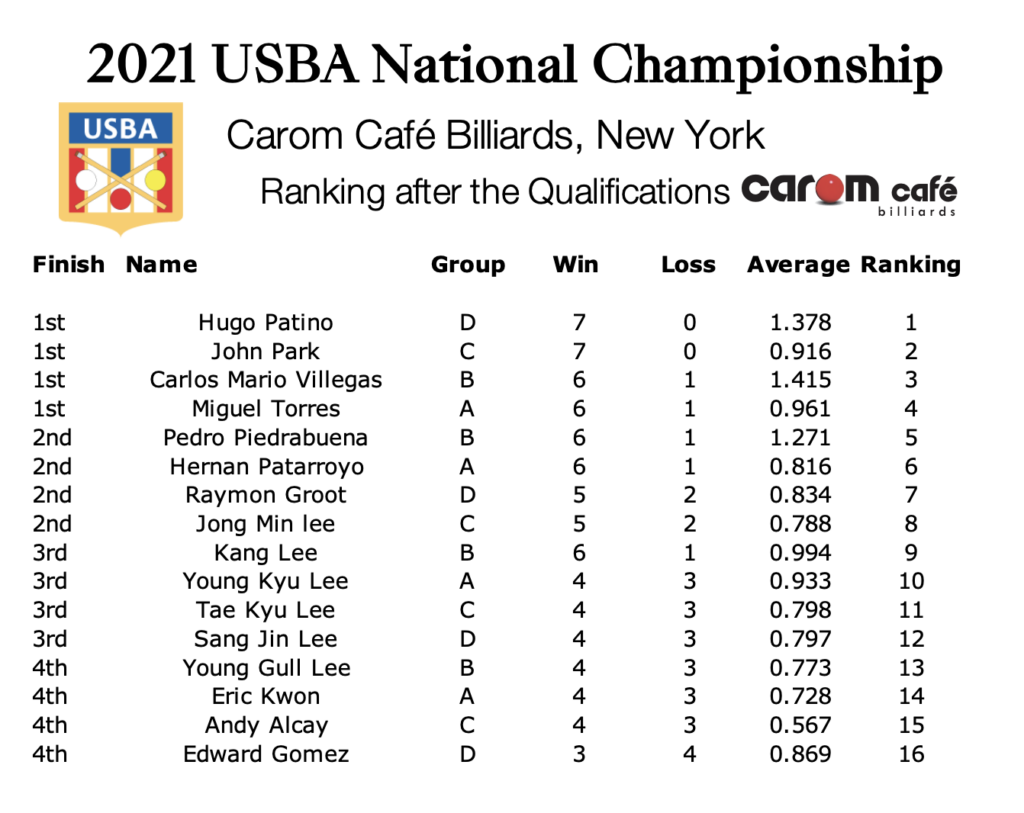 Top 4 from each group advance to the next round

Ranking in the Groups is based on: W/L, Average, Total Points, Head to Head, Points Against (if needed) 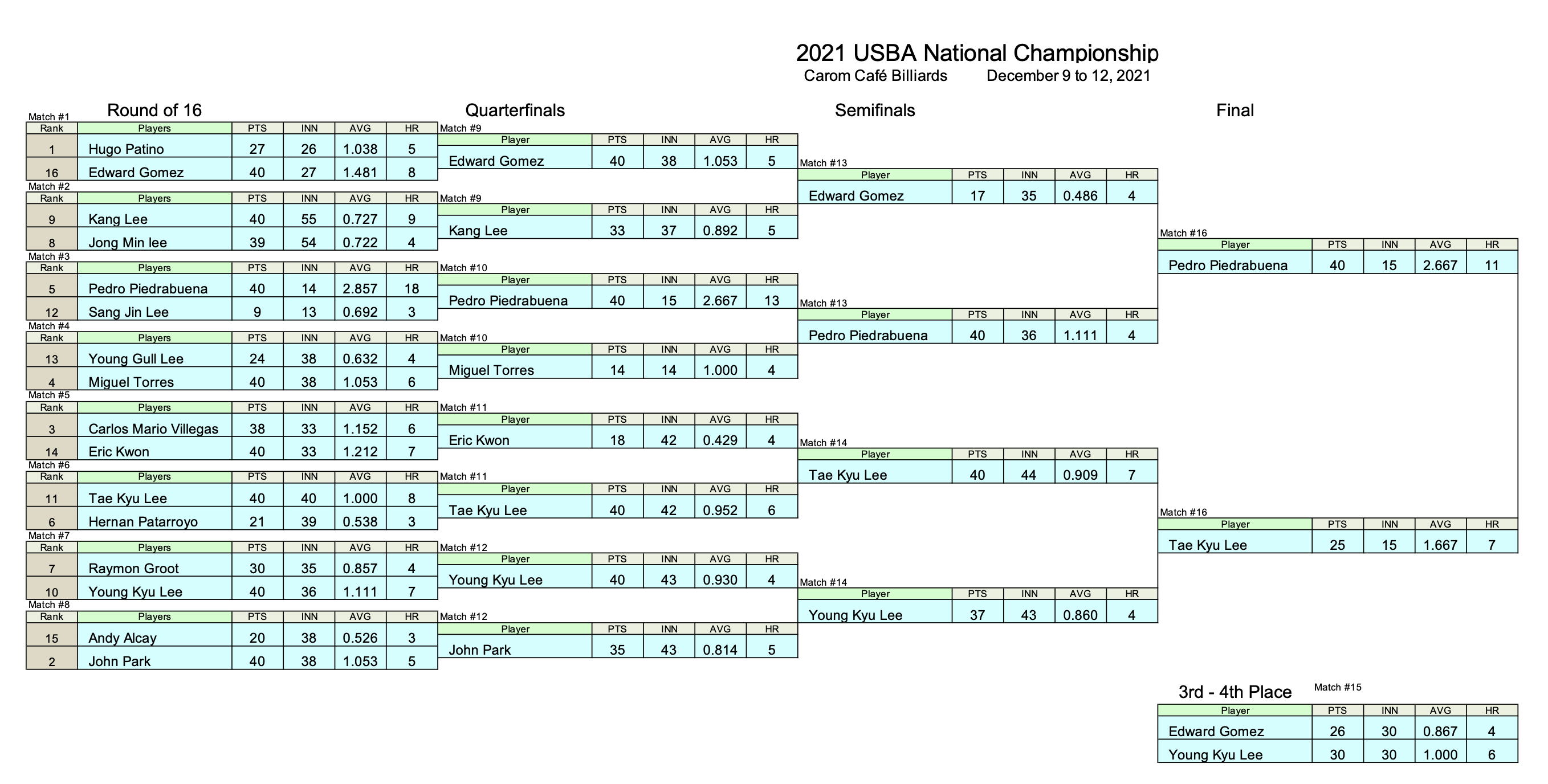