Wins for Greece, England and USA

The three evening session matches went true to the seeding as Greece, England and the USA enjoyed victories in the opening round of the 2018 World Cup of Pool at the Luwan Arena, Huangpu District in Shanghai.

The Greek pairing of Nick Malaj and Alexander Kazakis whitewashed their Hong Kong opponents 7-0 and looked in excellent shape as they look to mount a realistic challenge for the title. Hong Kong by contrast looked relative novices as they struggled to make an impact. 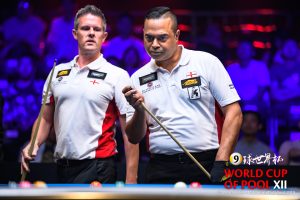 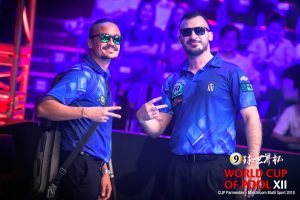 England eased into the second round where they will play the Philippines after a comfortable win against South Korea. Mosconi Cup veterans Imran Majid and Mark Gray had the match under control as Jeong struggled to keep him cueing arm under control.

Commented Imran, “It is great to get the W in the first match. We had some help from them, they missed two or three balls.”

Gray continued, “We both played well, until the last rack none of us had missed a ball in open play. English players pride themselves on not missing shots, I know that’s not what the game is about in general but in a short race to seven you can’t afford to be missing balls and not taking out clearances.

“Me and Daryl Peach beat Philippines en route to the final a few years ago. They are one of the biggest nations in pool so we know we are in for a tough time and we will be underdogs but I like being the underdog.”

In the final match, the USA pair of Shane Van Boening and Sky Woodward enjoyed a tussle against Singapore as they bumped their way over the line with a 7-5 win. Breaking at 5-5, the Singaporean pair of Toh Lian Han and Aloysius Yapp were favourites for the win but Woodward stepped up a bit after a shaky early part of the match. 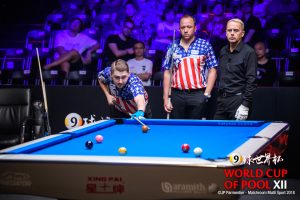 Van Boening said, “I travel all over the world and the first match is always the toughest – you have to get use to the atmosphere and get more comfortable and after we won we have a day off now so we will think it over a little more and do the best we do.”

There was more action at the Luwan Arena, Huangpu District in Shanghai, as the World Cup of Pool continued with three more first round matches and there were wins for Scotland, Germany and the China B team.

The $250,000 tournament originated in 2006 and has since moved around the world before touching down in Shanghai. The World Cup features 32 pairs from around the globe including two from host nation China. Running from 15th to 20th May, the event is live in over 100 countries around the world. 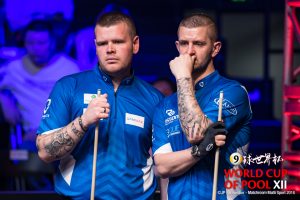 The opening match looked fairly even on paper with only Jayson Shaw’s partner Scott Gillespie being the unknown quantity amongst the four players. Gillespie is well known as an English 8 Ball player north of the border but has little previous experience at 9 ball.

The Canadian duo of Jason Klatt and veteran Alex Pagulayan opened up a 3-0 lead but were soon left in the traps by the excellent Scots who eventually ran out 7-3 winners.

Commented Gillespie, “It’s my first ever appearance on Sky so I am delighted. When you have Jayson Shaw on your team it makes it a slight bit easier. We are over the moon to win.

“I play English 8-ball but the last few weeks I have been practising with Jayson so he has given me a lot of tips.”

Shaw said, “I have been in Scotland playing golf in the day and practicing at night. We have been putting in a lot of hours together and I knew if we could come here and settle a little bit we could do well.

“The first few racks we didn’t really settle and they got a good lead but I told Scott, let’s stay positive and we will get a few chances and we did. We are happy to be in the next round.” 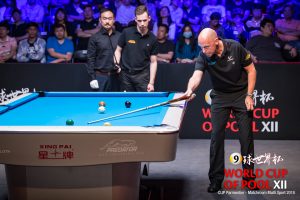 In the second match, the German pair of elder statesman of European pool, Ralf Souquet and its newest young star Joshua Filler, fired out a warning shot to their rivals as they cantered past an inexperienced Indonesian pair by 7-0.

The final match of the evening saw the young China B team overcome some nerves before hitting their stride to beat an over-matched South Africa side. The score line was 7-2.

Wang said, “In the first rack I was really nervous and when I tried to pot the 9 ball it didn’t go in, but later it felt more relaxed.  The crowd was cheering for us and that helped us to improve.”