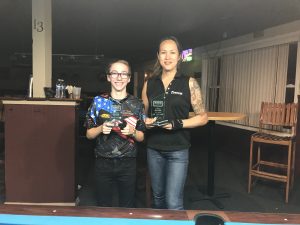 Some came to cement their standings in the Player of the Year standings, while others showed up hoping to confirm their appearance in the end of the year Invitational. The fight would be long and arduous but Ashley Burrows and Joshua Joseph would end up meeting in the finals.
Ashley Burrows path their though would start off with returning player Joe Palone whom she would defeat 7-3. Paul Madonia would fall next 7-6, Levie Lampaan 7-4, Paul Wilkens 7-4 , newcomer Manny Gomez 7-5.
Joshua’s path would take him thru Stewart Warnock Sr. 5-4 and Then he would meet up with Marco Daniele who would send him to the one loss side 5-1. Marco would then meet Bianca Martinez who would send him following Joshua 5-4. Bianca would then defeat Rick Rodriguez 7-1. Bianca would then play Ashley and after a strong lead would falter and fall 8-6.
Joshua meanwhile would start a 6 run win streak to reach Bianca Martinez. Michael Fedak would forfeit to start Joshua’s trek. Then would come Eric Rosen 6-1, Marco Daniele 5-3, Ada Lio 7-0, and Jason Goberdhan 7-3. Bianca Martinez would be the last match of the day as her and Joshua would match up and go hill-hill before Joshua would end up dropping the last nine and leave Bianca Martinez in third place.
Ashley and Joshua would decide to split with Ashely taking the first place trophy and Joshua would settle for the second and his highest finish of his career.