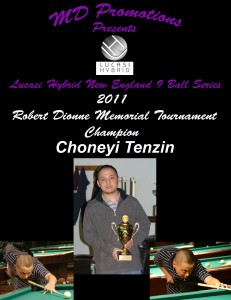 Choneyi Tenzin got by Gareth Steele twice to go undefeated in the 5th Annual Robert Dionne Memorial tournament, held on Sunday, March 20, under the auspices of the Lucasi Hybrid New England 9-Ball Tour. The $1,000-added event commemorated the death of Robert Dionne, father of tour director, Marc Dionne, who died the day preceding the first event held in his name. Proceeds from the event are slated to go to the St. Jude Research Hospital in Memphis, TN. Hosted by Buster’s Billiards in Somersworth, NH, the event drew 77 entrants.

Tenzin and Steele met first in the hot seat match, after Tenzin had sent Jeff James west 6-2 and Steele had shut out Ryan Nichols. Tenzin allowed Steele only one rack in advancing into the hot seat, and awaiting his return.

On the one-loss side, Nichols was met by last year’s winner of the memorial event, Nelson Oliveira, who’d defeated Kevin Sun 8-3 and Paul Eno 8-1 to reach him. James drew Dennis Daniels, who’d gotten by Fred White 5-2 and Ivo Petrov 4-2. Oliveira shut out Nichols to advance into the quarterfinals. James joined him with a double hill win over Daniels. James then stopped Oliveira’s bid for a second straight win at the event by defeating him 8-3 and then, was himself stopped in a shutout semifinal performance by Steele.

In the opening set of the true double elimination final that followed, Steele put up a better fight than he had in the hot seat match, but it wasn’t enough. Tenzin hung on to win the only set necessary 8-6 to capture the first place prize.