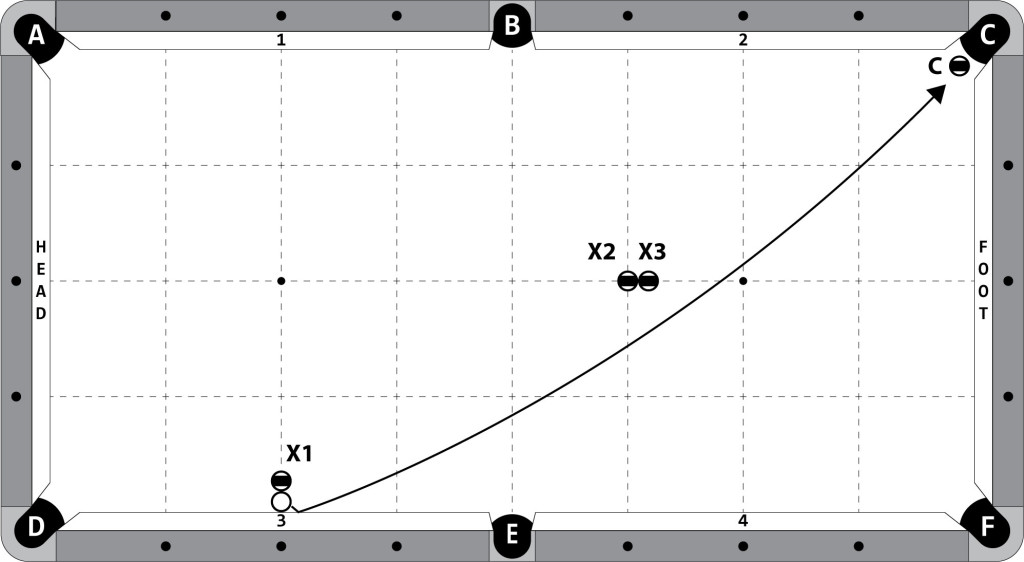 This month features a mind- and cushion-bending shot that can prove useful in some not so straightforward situations. The cue ball is trapped between cushion 3 and blocker ball at the second diamond. Blocker balls and  are along the centerline of the table, spotted on the third diamond and down. These block the natural kick angle to get directly to  ball. Instead, you can aim long to get around these blockers and use draw to curve shorter to make the hit.

First, let’s go over what to do with the cue ball. Since its sandwiched between the cushion and, you have to hit into cushion 3 and compress the cushion in order to get the cue ball out without contacting. In order to do this, you need to shorten your follow through, otherwise your cue tip will hit the cushion and your shaft will clatter into the blocking ball. This can feel unnatural for some players who have developed a long, smooth stroke.

Aim at the third diamond on rail 3. This should get you past the and  balls. Then add some draw. It is possible to over-draw this shot, so use small increments. Keep your speed consistent too. If you shoot too hard, the draw won’t have time to take. Too soft and you will run into the blockers. There are practically an infinite number of combinations of aiming, amount of draw, and speed that will work with this shot. You have to find what is most consistent for yourself and your stroke.

Now, if you want to apply this outside of trick shots, you can get the same curve effect even if the cue ball is off of the rail. It will take a little more draw and, of course, gauging how much and the right speed won’t be easy, but it can be a handy option if the straight kick angle is impeded by other balls.